Class: Series 1 Episode 7: The Metaphysical Engine, Or What Quill Did - Review 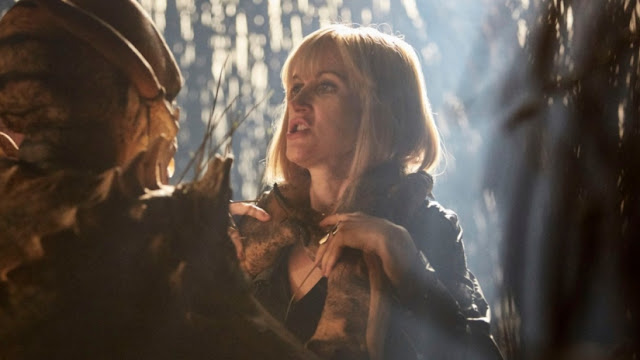 The last episode had solely focused on the kids, and the demons they are tackling inside of themselves. Some truths were told, ones that needed to be said and some that didn't. But for this episode, it was Quill who took the spotlight as she travelled to hell and back, literally, in a quest to regain her freedom.

The idea of 'double-decked', stories in Doctor Who isn't something new. One actor will appear in one story while the companion will appear in the other, just look at Midnight and Turn Left if you don't know what I'm talking about. Detained played out as a kind of claustrophobic thriller, while What Quill Did played out like an Indiana Jones movie, as Quill agrees to go on a quest to get the Arn, a creature put in her head by the Rhodians, out of her head, giving her, her free will back.

For all its wonderful special effects, this story was no less a compact script, aided by the fact that there were only three characters for its entirety. Aided on her adventure, Quill, (Katherine Kelly), is Dorothea, (Pooky Quesnel), Coal Hill's new Headmistress, who is certainly channelling her inner Edwardian adventuress thanks to her brilliant costume and Ballon, (Chike Okonkwo), an alien shape-shifter who is imprisoned in one form for the rest of his life. He agrees to be Quill's surgeon with the promise that he too, will be helped.

The trio head down the metaphysical rabbit-hole thanks to a strange machine, oddly bigger on the inside, now I wonder what that sounds like? While it isn't the TARDIS, it does have a lot of similarities to it. I wonder if it is a piece of stolen Gallifreyian technology?

The idea of travelling on the wings of belief felt really fresh here. It was nice to see Quill defrosting slightly and seeing hope begin to emerge from within her. And her relationship with Ballon was nice to watch. She makes him confront his fears and then he makes her confront hers, during their engrossing journey together. It all builds up to make the final moment between them doubly heart-breaking.

And it was great to get our first proper alien planet and get to explore it a little. The action had previously been restricted to Shoreditch and the surrounding Coal Hill area and the shadowy realm of the Shadow Kin. Everything looked nice, the candyfloss-like heaven of the Arn, even the nest of the Quill looked nice and cosy until Ballon decapitated the Quill Goddess!

By the end of the episode, Quill was brought back to her senses, as both a soldier and a survivor with a new life to fight for, the baby inside of her, which makes her pass out at the end. Katherine Kelly had taken a backseat for the majority of this series, only really appearing to do a funny one liner or sarcastic comment. But this episode gives her a chance to really shine and she proves that Quill is just as an important character as the others.

Also I noticed a few mentions of elements from the wider Doctor Who universe, UNIT and the Zygons get mentioned more than once. But they are more than little nods to the parent show. They are showing us that everything is incorporated into the wider Doctor Who mythos, even if the Doctor himself doesn't star in it.

Dorothea once again becomes the devious instigator at the end and is the reason why Quill doesn't return to Earth with Ballon. And we still know very little about her employers, the Governors of Coal Hill, also know as the EverUpwardReach LTD. I did prick my ears up at the notion that it isn't really an accident that the cracks in time and space happen to be opening up around Coal Hill. I doubt this will explored now, with only one more episode left of the first series. One does wonder if it was an attempt to throw a few hints at a possible storyline for a second series.

I hope this series does get a second series and following on from this episode, I am really looking forward to see its conclusion...