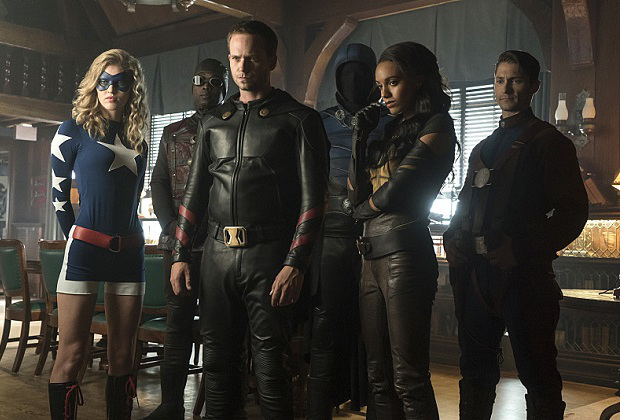 Sometimes, Legends of Tomorrow, makes me feel like it really does pander to the comic book fans who the show is aimed at, rather than a general audience. This isn't a bad thing but look at all the elements that are included in this episode, time-travel, ray guns, The Justice Society of America and spaceships. The whole thing really feels like a comic book come to life...

Legends of Tomorrow has always been one of the best DC shows on television for me. I had a hell of a lot of fun with the first season so what could possibly better it for me? Would the appearance of The Justice Society fighting souped up Nazis do the trick? It damn well did!

Now this episode isn't the best episode the show has ever produced, it isn't even the best hour of television ever produced. But it is certainly a damn fine way of spending an hour and could possibly be the episode of the series I have enjoyed the most. This episode is quite heavy on the setting up of the ongoing storyline, particularly that of Nick Zano's Dr. Haywood, a character who in the comics is the superhero, Citizen Steel. But for now, what I like is that this season looks like it is going to future one off, self contained episodes, at least for now. No time is wasted with this episode. In the first episode there were a few two-part episodes which felt like they could be spinning their wheels somewhat, The Justice Society of America is a non stop story from the get go. It packs a lot of exposition in the opening scenes in the JSA headquarters and then proceeded to allow the heroes to fight Nazis in 1942, with a bunch of obscure heroes.

And things just happen in this episode with not a lot of time to process it or talk about it, you just have to go with it and except it. The other DC series on television are unapologetically superhero shows but Legends is hardly that, it features a crew of misfits who have a mission which doesn't really allow for the traditional rescues so what identity does it really have? For me it has a distinctive Indiana Jones feel. It is really tough not to see some heroes fighting Nazis in 1942 and not get a real Indiana Jones feel. It feels like the goal of this episode was to expand on that feeling and it really does work.

There were a few bad moments here though, the story between Heywood and his grandfather was a little predictable as was Professor Stein's inability to handle the leadership role of the team. These points could have perhaps been better served being explored over a few episodes but there wasn't any time for that, given that there were so many characters to do justice to in this episode. But I suppose, as the Fourth Doctor once put it, you have to take the rough with the smooth.

But the whole JSA look great, as did their costumes that were brilliant tributes to their original comic book counterparts. There were a few characters, Dr. Mid-Nite, Commander Steel, Obsidian and Hourman, don't get a lot of development but given how many characters feature in this episode, I hope they will return in the future and these characters are given the treatment they deserved.

And I think the inside of the Waverider looks so much better. While it isn't as roomy as the inside of the TARDIS, there looks like there is so much more space. And can I just comment on how much the central console looks like the one from the TARDIS? It is even hexagonal, like the one from Doctor Who! Is it a nice little nod to Doctor Who? I hope so! The production values on this show continually amaze me. And who really cares if the super-Hulk like Nazi looked a little dodgy, we got some wonderful moments between him and the Reverse Flash, who is setting up the Legion of Doom, the baddies for this season.

This episode was pure gold. Plain and simple!