Hawkeye: Volume 1 - My Life As A Weapon - Graphic Novel Review 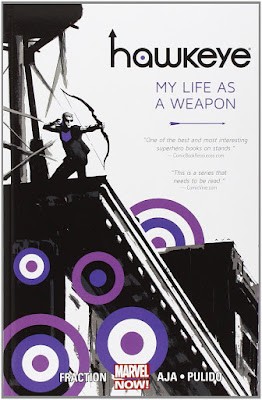 When the issues that make up this collection were published alongside, Daredevil By Mark Waid, Captain Marvel and Hawkeye, led the way in the new Marvel Now revamp of the Marvel superheroes. And part of what makes the Matt Fraction take on a previously dull character like Hawkeye so enjoyable is the overall tone of the book. With the character having gained previously unknown popularity thanks to the Avengers film from 2012, it would have been easy enough to mistake this title for another bog-standard action series. But Fraction takes an unconventional look at Clint Barton by all but removing other superheroes from around him. Barton is rarely seen in costume through this book as My Life As A Weapon tends to follow Barton's personal life and see how it interacts with his life as an Avenger. Barton can't help but get himself involved in troublesome situations, be it stopping criminal families, strange redheads or taking in a maltreated dog who loves pizza.

And anachronic story telling is a theme that runs through the pages of this book and Fraction tells it a different way with each issue. The third issue revolves around the nine mistakes Barton tends to make each day and every issues starts with the phrase, "Ok, this looks bad," followed up by a jump back in time to see how he got himself into this particular situation. This keeps the book feeling unique and different from other Marvel stories being told and you don't know for certain how the story or the next one is going to eventually unfold.

It is true to say that Clint Barton has never been the most serious of comic book characters and never more is that evident than in these pages. Most of the dialogue comes from pop up boxes which tell us what Barton is thinking in each panel and the thoughts are laced with sarcasm proving he doesn't even really take himself all that seriously. Alongside Matt Fraction is letterer Chris Eliopoulos who both refuse to use the usual conventional sound effects that you find in a comic book. If there is a gun being cocked by a baddie, the sound it makes is spelled out like script descriptions and characters who speak in foreign languages don't get their dialogue translated properly but instead as if we are reading what Barton thinks they are saying. The way this book has been written is ingenious and not something that I have seen before.

Despite the book's standalone tone, it ties into the main Marvel continuity extremely well. The second issue sees the return of the Circus of Crime and cameo appearances from villains, Kingpin, Madame Hydra, Madame Masque, the Owl and Tombstone. None of them are fully identified for the reader but it is made obvious that is who it is. Masque becomes the main villain for the final two issues of the book. But Clint's main villains for this book are the "Tracksuit Draculas" lower-tier Eastern European gangsters whose only strengths are their numbers and brutality. Also be prepared to read the word "Bro" over and over again. In fact, it is used so much, I was shocked to find the book wasn't called Hawkeye: Bro.

Although he is the main character in this title, it is his book after-all, Clint is often joined by his sometimes sidekick, Kate Bishop, the Hawkeye from the Young Avengers team. Although she is a better archer than Clint, their student/teacher banter gives this book a strong sense of responsibility that runs throughout. The final issue collect in this book comes from Young Avengers Presents #6 which sees the first meeting between Clint and Kate and it serves well as a dry run for Fraction's interactions between the two characters. It also serves to prove how much difference artwork can make as this issue was drawn by Alan Davies who has a far different style than the rest of the book.

Much like the art that can be found in the Daredevil run by Mark Waid, the art in Hawkeye is cartoony. But the work from David Aja and Javier Pulido is a lot rougher and this roughness helps to set the tone of Clint's mind and the way he sees the world. And Matt Hollingsworth, who is the colourist adds the final layer to the book using a very specific colour pallet. The colour purple, the colour of Clint's costume is always present in the book and is the one colour that stands out on each individual page.

There is no denying that when it was originally published, Fraction's take on the character of Hawkeye and the overall book took the comic book community by storm. And it really does feel like a indie comic book title that just happens to be in the Marvel canon. There is strong characterisation, art, colour and storytelling which will keep everyone happy within these pages. And it serves as a great jumping on point for people who have never read a Marvel comic...