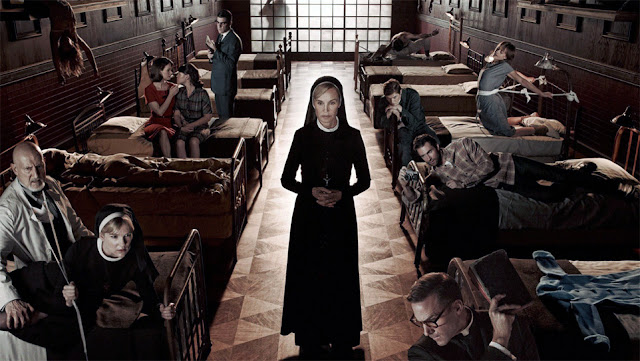 For me, there was a feeling that Asylum was going to be a bit of an uneven season, it had a real 'kitchen sink' type of feeling and the inclusion of the 50s/60s idea of little green men didn't really seem to meld well with the Catholic church-run Massachusetts asylum, Briarcliffe. In the second episode it is the Devil himself who decides to make an appearance and then in the third episode, we are also forced to deal with a mad scientist who is really demented. So yes, Asylum felt like it was going to be a particularly bumpy ride, especially in the opening episodes.

And what didn't help was that is was obviously apparent that many of the characters only existed to serve the sentence of merciless anguish as things turn so grim they ended up feeling more like props than people. The two women who end up like this is Chloe Sevigny and Clea Duvall who began as women but ended up as half-human corpse monsters. Luckily, the storyline sorts itself out with the two-part Anne Frank story which was brilliant. It was the inclusion of Nazism in the character of Dr. Arden that made this seriously demented character interesting to watch. His backstory is revolting but explains every action we had already seen him commit.

It is also following the Anne Frank story Jessica Lange's character, Sister Jude, gets a more human side to her and things continue to pick up by shifting a lot of the story to the character of Lana, who during the opening episodes had been sharing the stage with Jude and Evan Peters', Kit Walker. Lana sure goes on one hell of a journey, she really does go out of the frying pan and into the fire when she is abducted by Dr. Thredson, a sadistic serial killer who calls himself Bloody Face. It her actions when she is being held captive that help us to see her as the story's heroine, who manages to rescue herself and Kit as well. But it isn't until the well-rounded finale, that we truly understand this was Lana's story and everyone we had met along the way was just a chapter or footnote in the books and projects she would go onto to create.

The theme for this season was the overpayment for one's sins. Keep in mind that Jude was in no way a peach and was really on the run from vehicular manslaughter, the moment she begins to see things more clearly and begins to feel bad for the things she has done, the hammer drops. Her character begins to change when she takes pity of the woman claiming to be Anne Frank and can see the cracks in Arden and the demon possessing her fellow sister, Mary. Her punishment, framed for the murder of a guard and locked in solitary confinement for years, came after she had nearly confessed for her crimes to the family of the little girl she had run over years before. But the message here was clear, if you take up arms against evil and injustice, it is you who will suffer.

And it was within that sentiment that Asylum lost its way quite a bit. I understand this show is supposed to be a mish-mash of horror tropes meant to unsettle and scare the audience. And with the strange directorial choices and music cues that feature in this season, it is certainly one of the most daring show's currently on television. But there began to be a tiring nature to the misery we see in the season, mostly from Lana's initial escape from Thredson and the ride in a car with a suicidal misogynist which results in a car crash and a trip back to Briarcliff. She had gotten out but was now back in and strapped to a bed in a head-brace like we had first seen her.

And then after Lana's escape, Thredson comes back only be captured and then to escape. Lana then makes her third escape from the evil of the asylum. And there was a disjointed nature to the penultimate episode which saw an introduction to a new patient, played by Frances Conroy who resembled her other role in the season as the Angel of Death. But to what end? We never find out! The character just vanishes along with years of Jude's life. Kit also suffers as he looses both his wives, both of whom had been given back to him by the aliens, just so that they could eventually be taken away again! One thing I'm not really sure of was why he had Alma committed because of the murder of Grace, when Grace had technically died in the asylum, only to be brought back by the aliens?

Monsignor Timothy almost dies as a lying, conniving idiot when he foolishly trusts the regretful words of the psycho-Santa that resides in the asylum, Leigh Emerson. But he survives being crucified and is reborn as a man who is intent on destroying the devil that that resides inside Mary Eunice. He  did. Unfortunately, despite the actress playing her fantastically, Mary Eunice was clearly a character who was designed to do nothing in the series except live a truly miserable life and then die at the hands of a demon. After killing her, the only way he can remove the demon, Timothy resorts to his old ways but it makes it all the more strange that we followed his journey as a hero for only one episode. Why make him a hero if they were only going to make him revert to his old ways in the end?

But what makes the season enjoyable to watch, I finished it in a weekend, is the acting from everyone involved, who looked like they were having a blast, particularly Zachary Quinto as Thredson and Lily Rabe as the Devil-Mary. Dylan McDermott also appeared to enjoy his role as the son between Lana and Thredson when he appeared at the end of the season. But Asylum wasn't without its little victories and surprises. It certainly wasn't a story that I could see unfolding in my mind, it continually kept me guessing. The final episode, Madness Ends, put the season in a nicely packaged perspective, even though if it never really told us if those aliens were real or if they were elements of a delusional mind. But what I thought was a really nice touch was the way that Kit and Jude came together towards the end of her life. Rescuing her from the asylum, Kit allows her to live in his house with his children. His children call her their nana and it really interjects some forgiveness into the mix and gives Jude a family who loves her. Her death scene was beautifully done and made me well up when she was dying. I hardly ever get sad at programmes on the television but I did here, so it must have been some good!

The intent of many seasons of American Horror Story is to make a number of WTF moments, which is a mission that Asylum achieves instantly. But what is nice is that in those WTF moments, there were nice moments of warmth and honest emotion. It was just a shame that these elements were often at the losing end of cannibal mutants and face biting Santa's. Asylum is a fun ride, if not a completely satisfying one...