Doctor Who: Terror of the Zygons Review 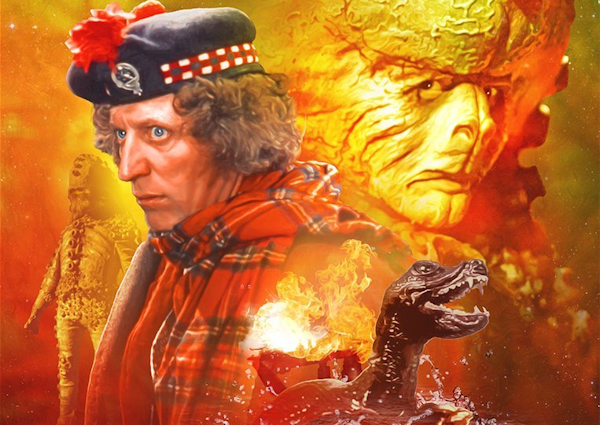 For a great story it is a little strange that for once, it isn't the shape-shifting aliens who feed off the milk of a cyborg Loch Ness Monster who are the problem for Terror of the Zygons but that the story is so formulaic. The difference between a good story and a great one is whether or not the story will surprise you in other ways. This story takes the easy route, relying on formula and narrative shortcuts when it could have gone for something which was a lot more ground-breaking.

Now, I'm not saying this story isn't enjoyable. I've always loved this story and I think it is a hell of a lot of fun. But when you watch it back, it does get harder and harder to ignore the faults that unfortunately weigh it down. 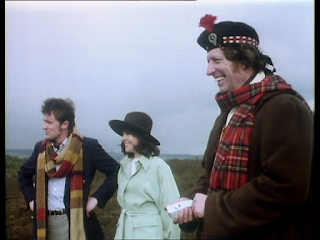 But one thing is for certain, the main cast is at their height, Tom Baker is brilliant as the moody and mercurial Fourth Doctor and Elisabeth Sladen as the plucky journalist, Sarah Jane Smith. Joined by the ever-reliable Nicholas Courtney as the Brigadier and Ian Marter as the brave Harry Sullivan, the story is a hit on the acting front. Set in Scotland, though filmed in Wales, this adventure as a Scottish flavour to it which runs throughout. But I do hope that the author, Robert Banks Stewart, a Scot himself, was just making fun of the Scottish stereotypes when in the opening scene, he writes a worker at a doomed oil rig, asking for Haggis.

It isn't difficult to understand why this story is so popular and well remembered. But what is difficult to understand is why the show waited nearly 40 years to bring the Zygons back. They finally returned in 2013's Day of the Doctor and 2015's, The Zygon Invasion/The Zygon Inversion. Orange and oddly bulbous, they are a triumph for the visual effects department who really stretched the limitations of what you can do with a low budget. Of course, they aren't flawless, if you look down at their feet you can see they are boots which have been spray painted. But much like the Second Doctor enemies, the Yeti, the Zygons are scary in a somewhat absurd way. While they may give you nightmares, you won't need counselling! 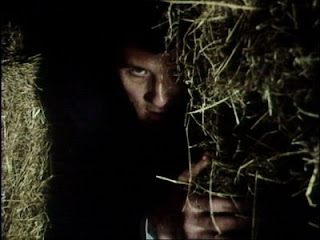 And with the story being directed by Douglas Camfield, the action sequences are in damn good hands. For me, there are two standout moments, the shock ending of episode 1 where we see a Zygon for the first time is terrifying and the scene which features the Zygon duplicate of Harry attacking Sarah in a barn with a pitchfork is really disturbing!

Opening the second series of the Baker era, it is odd that this story feels more like a Jon Pertwee tale. Instead of exploring the endless depths of space and time, we return to Earth to investigate some oil rigs which have been mysteriously collapsing. I think the story is meant to be an overt commentary on the Pertwee series. But then again, perhaps it is to show the differences between the Pertwee and Baker eras.
In some ways, it is no different from the Pertwee era, the crisis is considered of vital importance because it involves oil but the Doctor patronizingly scoffs at what he considers to be provincial Earth attitudes. No doubt the Third Doctor would have said something similar to that but the Fourth Doctor's attitude seems far more distant and his statement, hoping the Brigadier had a good reason for calling him back, feels more like a threat. While Jon Pertwee's Doctor had no choice but to help Earth, when he did eventually get the use of the TARDIS back, he went of traveling only to return to Earth to die. But the Fourth Doctor has no such loyalties as he leaves Earth for an extended period of time at the first opportunity. This helped to show this new Doctor in a different light as he was far less interested in Human concerns. Where the Third Doctor would have argued endlessly with the Oil managers, the Fourth Doctor shows no interest in the situation whatsoever before the aliens turn up. And then the Brigadier points out how many people have died and while Oil companions aren't worth this Doctor's time, he will help people in need. 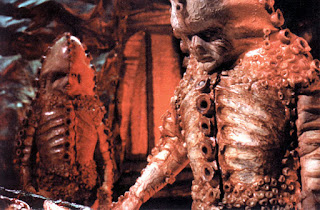 After a great first episode, it is unfortunate that it is during the second episode that the story starts to lag. I can't quite put my finger on where, possibly just after the wounded Harry Sullivan is kidnapped by the Zygons, is where the story begins to slow down. One reason for this lagging is that the cocky Zygon leader Broton takes it upon himself to blab everything we need to know about the creatures for no other reason than simply telling us. He tells us everything, where they are from, what happened to their home planet, why they want Earth, what they are going to do to the people of Earth and that the indestructible Skarasen, the Loch Ness Monster, is their only source of food. They need its lactic fluids to survive, yuck, I don't think I would have wanted to hear that watching this with fish and chips! The problem with revealing his plans that early is that the audience know his plans and goals while characters like the Doctor, Sarah and UNIT are in the dark which lessens the surprises when they find out all this stuff too.

And while the design of the Zygons are one of the most convincing the production team have ever come up with, they don't rise above the part of The-Monster-Of-The-Week. When it comes down to it, Broton is just another tentacled alien who wants nothing more but to conquer the planet. But what stands out about Broton is the performance the actor, John Woodnutt gives us, not only as the Zygon leader but the Duke of Forgill and the duplicate of the Duke of Forgill, too! 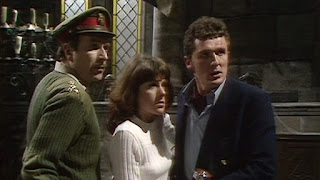 What we are told about the Zygons only continue to make Broton look like another megalomaniac villain when everything else suggests he is out of character. We learn that the Zygons landed on Earth hundreds of years ago and hid in their space-ship under Loch Ness somehow managing to stay away from attention with a giant Loch Ness Monster running about feeding them. We also learn that the only reason the Zygons have shown their faces is because the Oil rigs were built in the path of the Zygons Loch Ness Monster. Had they not been built or put there, chances are the Zygons would have just stayed at the bottom of the Loch.

What also is not explained is why Broton, now stirred into action, is suddenly so determined to move this plan forward so quickly. Why he suddenly needs to this when he had already explained it would take the rest of the Zygon fleet thousands of years to get to Earth is baffling. And at the end of the day, Broton's plan is risky, dangerous, silly and self destructive. His battle with the Oil rigs is built out of self preservation given that the Skarasen is the only source of food for his people but why does he then want to conquer the world with only six other Zygons and a souped up robot? It might have made more sense had their sad history been explored more than it is instead of making Broton another intergalactic thug. These Zygons are fled their destroyed planet and are refugees and like many other Who villains like, The Wirrn, The Ice Warriors and The Silurians, they have endured great tragedies. But any opportunity not to show things from their point of view is sadly a missed one...