Doctor Who: Genesis of the Daleks Review 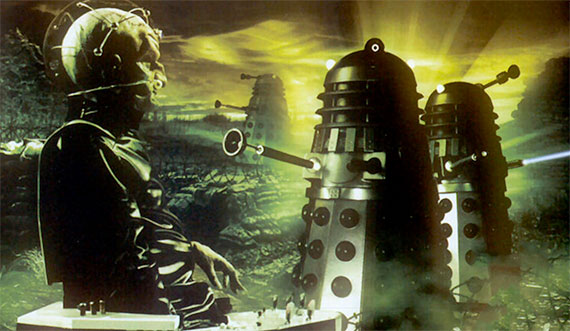 Amongst the enormous amount of Doctor Who television stories there is on offer, very few of them actually really changed the dynamic of the show. For me, An Unearthly Child, The Tenth Planet and Survival are stories that examples of how the show developed and kept surviving. Genesis of the Daleks is another of those stories but not just because it gives the origins of the Doctor's arch nemesis' but it was more important because of the introduction of the insane creator of the Daleks, Davros. And through Davros, the Daleks were finally given a face.

That was always the main problem with the Daleks. Despite their popularity, design and iconic status as the first monsters from the series, it was hard to make effective characters out of the creatures that had been purposely designed to have little in the way of individuality. And although they aren't robots, it is easy enough to make that distinction since they all look alike. And they all had the same hostile and aggressive personality which they could only express through shouting and shooting things. They didn't even have names. And the whole point of a Dalek is that they are fascist, conformist bullies that need to eliminate anything that isn't a Dalek. It is the Nazi ideology taken to its extreme. 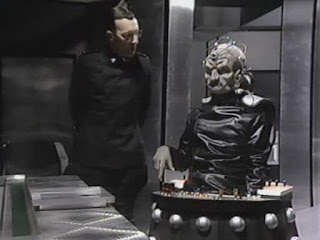 It makes perfect sense that Terry Nation, the man who created the Daleks in 1963, was asked to show their birth, leaned heavily on that very concept. Placing the Dalek spawning grounds in a militaristic society ruled through fear and terror by it's SS-like secret police and in Davros, it creates its own Hitler, a ranting, domineering madman with dark dreams of glory. While the newly devised Dalek mythology doesn't quite match up with what had already been established from the previous serials featuring the metal meannies, as the Daleks had been shown to be motivated at least as much by their self loathing and terror of other people as by their own aggression and arrogance. And while Genesis doesn't make a crystal clear connection to the first story to feature the characters called The Daleks, then it manages to make it up by hitting the emotional target dead on target. The war-torn planet of Skaro feels like the only place the Daleks could have come from, corrupt, ruined, poisonous and grim. 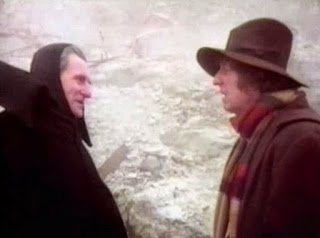 But in this story, it isn't only the Daleks and Davros who get the chance to be really interesting, the Doctor's part of the story is more interesting because, in a more subtle way, it is just as earth shaking as what the Daleks are up to. We get a nice twist on what the Third Doctor used to do, a mysterious Time Lord goes and gives the Doctor another mission, following on from the plot thread that every now and again, they ask him to do a specific job to allow him to keep travelling. In this instance, they send him and his companions, Sarah and Harry to the war torn planet of Skaro to alter the Daleks' creation or even halt their development. So they are either never going to be born or they will be less dangerous.

But this Doctor is given a longer leash to do what he likes and even gets the ability to refuse the mission. But the Time Lords are so sure he will do it, they have dumped on Skaro already. They have asked him to change history, something he would have once disagreed with. But like all secret spy missions, there is the faint whiff that something is off. It isn't quite as noble as it first appears. Ultimately the Doctor is sent to commit genocide against the Daleks. This is of course, when all is said and done, an act of war. It is only justifiable if you accept the idea that the Daleks deserve to be wiped out because they are trying to do the same thing to other species. 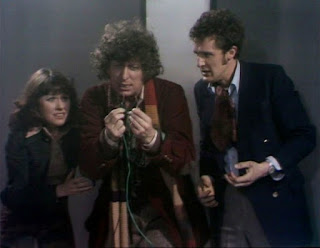 But that is the problem with this story, Nation treats the Daleks like they are a potential virus and with Davros removing all their conscious', he turns them into psychopathic murders. This only gives us, the viewers, the chance to see them as evil incarnate rather than giving them some slight redeeming qualities. When the Doctor gives us the whole, "Do I Have The Right," speech, it is harder to take his side than it is supposed to be. By making the Daleks nothing more than twisted computers, they aren't treated like a race of their own. And because they aren't treated like a new species then there is no genocide in exterminating the lot of them. And if they are a virus, there is no harm in giving them a cure. And the Doctor is a catastrophic secret agent. From just trying to stop the Daleks, his very presence is what makes them stronger and more desperate to exterminate all life in the galaxy!

But nothing can take away from the awesomeness of Davros. He is a grotesquely disturbed human/Dalek hybrid who outwits the Doctor constantly, only to meet his hand at the hands of his own creations. He is the sort of character that would never have been done had any other production team except for Phillip Hinchcliffe and Robert Holmes had been at the helm and were pushing the show in a more horrific direction. Davros is a twisted parody of the Doctor, specifically, the Third Doctor, given that he is an eccentric scientist who worked alongside a military organisation. Despite his apparent death at the end of the story, Davros made appearances in all of the subsequent Dalek stories up until the show's cancellation in 1989. He takes up the central role in Dalek mythology despite the Daleks constantly veering between using him as an ally, a father figure or another lesser being to be exterminated...