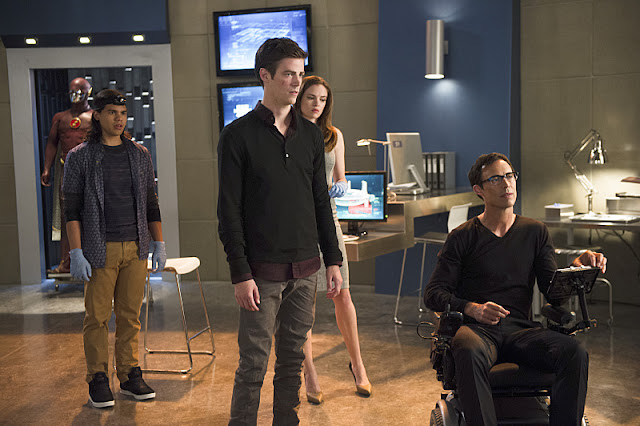 After a brilliant pilot episode, a show will usually slow down a little in an attempt to ease the viewers into the plot, but not this show! The Flash continues to be continuously strong. A lot happens in this episode both plot and character wise.

I like that we are starting to see Barry's past, we're seeing more of his relationship with Joe and Iris and we are starting to see how his work for STAR Labs, the police force and his need to be a hero and save his father is going to effect his life in the long wrong. This much development hardly ever happens in a show this early on and something tells me that The Flash will be all the better for it. But those pesky metahumans are starting to come out of the woodwork, making Barry's life all the more difficult.

It is nice to see Barry is starting to use his powers for more than just taking on metahumans. He saves people from a burning building and seeing him struggle with the tough choices he will have to make in situations is shown by his need for advice from Cisco Ramone. But each person at STAR Labs have their own opinions on vigilantism. While Cisco enjoys playing the Oracle role, Caitlin isn't best impressed. Wells believes Barry should be encouraged by Detective West is firmly opposed to Barry even thinking of being the Flash long term. But perhaps those fears and worries that Caitlin and Joe have are right. Barry has absolutely no idea how his powers work or how they will develop and his sudden headaches have everyone worried. I guess we'll find out how his powers will effect his biology over the course of the season. And would he be able to able to eat as many tacos as Cisco says and still fit into that tight, form fitting suit? Maybe these aren't questions we are supposed to ask! But at some point the show will force Barry to make a choice, will he be able to save innocent lives against metahuman aggressors?

The metahuman in this episode is Danton Black. I didn't know who was Black was at first as I only know the major Flash villains but I assume he is Multiplex. But when I saw him multiply himself I though of the Marvel X-Men character, Jamie Maddrox who has similar powers. Black does come across as Multiplex considering he can clone himself at will too. It is interesting to see that the clones can't move without him giving the orders and they display a hive mind. But do they have echoes of an individual mind, could they possibly function without the king? And how do their clothes, guns and bullets many to clone themselves too? Are the clothes essentially their skin? But if we ask these sorts of questions then the whole story starts to fall apart!

Another question is who is Barry's 'Dad'. He has three potential father figures here, his biological father who is in prison, Detective Joe West who has looked after him all these years and Harrison Wells. Detective West has really grown on me and he is the guy who really cared for the troubled boy for all those years even though he had his own daughter. Throughout this episode, he continued to prove that he is the 'Dad' and even though he is pushed away a little in this story by Barry I don't think he is going anywhere. And the STAR Labs gang seem to believe themselves to be smarter than the police force even though they are not?! But Barry needs a team like Oliver Queen's and by the end of the episode, Caitlin, Cisco, Wells and Joe end up agreeing to help each other quickly becoming Team Flash!

The events really come to a head when Iris reveals her new obsession with the Flash and Danton Black invades STAR Labs. The special effects continue to be appropriate and fantastic throughout the episode and its really makes the whole thing shine. I really grit my teeth when Danton's army of clones advanced and was cheering when Barry finally pulls himself together and comes up with a plan to stop him. But he only wins thanks to the help from his new found team.

The glimpses of Barry's childhood are a really powerful pay off at the end of the episode. From these flashbacks alone, I can see how the producers have learnt from the sometimes uneven flashbacks in Arrow. I can't wait to see the next episode!