Doctor Who: Into the Nowhere - Review 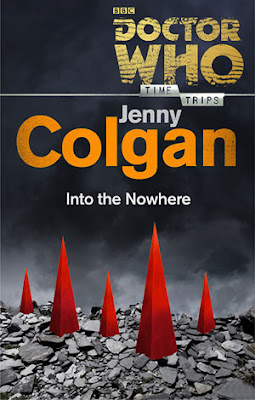 Author Jenny T. Colgan is now a familiar face in Doctor Who writing circles. But she wasn't always, in 2012 she wrote the Eleventh Doctor and Amy story, Dark Horizons which saw the pair arriving in a Scottish setting to face the ancient Lewis Chessman. Into the Nowhere takes the Eleventh Doctor and Clara miles away from Scotland, to a planet that shouldn't possibly exist...

Written in 2014, The Time Trips range of E-Books allowed the author to pick whichever Doctor and travelling companion they wanted. So it was only a matter time in the range before someone picked the then, latest TARDIS crew. I am certainly glad it was Colgan who chose the Eleventh Doctor in his later incarnation and Clara. She captures Matt Smith's performance perfectly, making it obvious who the Doctor is, it is like Matt Smith is right there on the page with you. Unfortunately, Clara isn't really there. She doesn't have a personality, no tics, nothing but her pushiness but I suppose, at this point in Clara's history on the show, she was a tough character to get down on paper so Colgan should be praised for trying to do so. Poor Clara ends up either being written as another generic companion or like Amy Pond and believe me, there are moments when she really does come across as Amy.

I'll have to scout around the villain because it really is a surprise when we learn the identity of the baddie but there are some living skeletons who roam the surface of the planet and the planet itself is perfectly designed to kill anything on the surface through quicksand pits, gorges, dangerous forests and a plethora of other methods. There is a bit of an Indiana Jones adventure kind of feel to it and as a matter of fact, that is what this is, Indiana Jones in space. There are also a few rather scary and unnerving moments that put Blink to shame

A problem that does plague the book is that the pacing is often off but there was something about Colgan's writing style that kept me interested. There is no need for Colgan to make the book try and work as a sequel to Dark Horizons as that isn't what it is. What it is, is a perfect slice of Eleventh Doctor action that might feel slow in some places but ultimately pays off if you keep going...