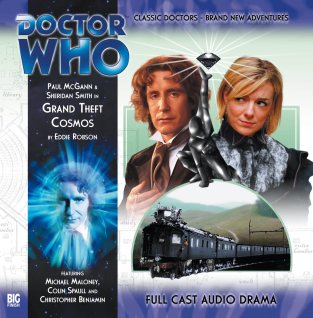 The idea of a jewel heist was nothing new to Big Finish by the time Grand Theft Cosmos came around, as Big Finish had already done it in the brilliant, The Veiled Leopard. But nevertheless, there is an air or energy and fun with Grand Theft Cosmos, the lengthy explanations of how the heist is going to be pulled off are rightly set aside as the time limit wouldn't permit such large pieces of exposition. Lets face it, this is an audio drama, not a motion picture, it just wouldn't work. And to make matters more enjoyable, the Eighth Doctor and his companion, Lucie aren't the only ones trying to get the famous Black Diamond though the Doctor and Lucie want to steal the diamond for the best of reasons.

Released in 2008, this heist story has a distinct Agatha Christie feel about it which was nice as it coincidentally was made available alongside the David Tennant adventure, The Unicorn and the Wasp, which featured Agatha Christie. But this story also featured some famous Doctor Who faces from the past and present. Christopher Benjamin makes a welcome appearance here, he had previously starred in Inferno and The Talons of Weng-Chiang and also featured in The Unicorn and the Wasp. And Colin Spaull had appeared in Revelation of the Daleks and Rise of the Cybermen/The Age of Steel.

Author Eddie Robson also features a duo that had appeared in his previous story, Human Resources with the return of The Headhunter played by Katerina Olsson and Karen played by Louise Fullerton. The pair have something about them that make them great felons and Karen is clearly still learning the ropes being a time travelling criminal. Though I do have admit to forgetting that the Headhunter had recruited her as her companion at the end of Human Resources! Whoops.

While this story won't break any records or win any awards, it is a fun enough way to spend an hour and I promise you, you won't feel like you've been robbed!