Doctor Who: Day of the Daleks Review 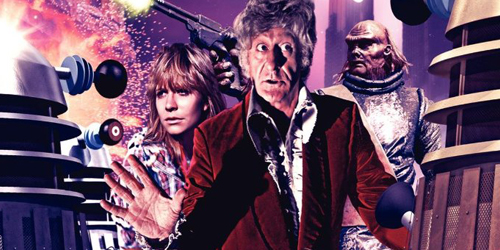 The Daleks had last been seen in 1967 when we witnessed what the Doctor had called their final end. Of course, science fiction's greatest creations couldn't be gone from the show and in the opening story from the third of Jon Pertwee's series', they made their return. But is their return triumphant?

The story is great, don't get me wrong but for a story with the name like Day of the Daleks, they do surprisingly little. All they do is rant orders rather than actually get out their and do some exterminating! Instead, most of the action is given to their servants, creatures called Ogrons. What this story is exciting about and worth watching for is this is our first time we get to see the Daleks in colour! And from the bright gold colour that one of the Daleks is painted, the producers obviously wanted to put viewers' colour television sets through their paces.

The story itself does something that the show hadn't really done before and wouldn't really do again until the Moffat era, it gives us our first example of a paradox. It is just odd that the story would have worked better without the Daleks, which is what I think author, Louis Marks had originally intended. 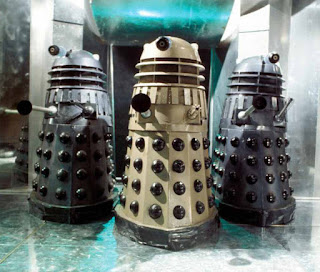 Day of the Daleks came decades before the Terminator movies and watching this, you would be mistaken for thinking that the creator of the major movie franchise stole from this show. Future terrorists come back into the past to assassinate the man who they believe is responsible for creating the terrifying world that they live in. A war ensued after a mysterious explosion killed all the delegates at a world peace conference and it left the earth ripe for Dalek conquest. The paradox comes into play when we learn that it was the terrorists from the future who caused the explosion that they are trying to stop. But that is the beauty of such a paradox, those who are included, don't know that they are in a paradox. This is a clever story, especially for one aired in 1972 and it is a shame that the unavoidable info-dump comes only in the final episode. But all four episodes are full of action, incident and excitement.

Jon Pertwee stars alongside Katy Manning as his companion Jo Grant. They are joined by UNIT regulars, The Brigadier (Nicholas Courtney), Captain Yates (Richard Franklin) and Sargent Benton (John Levene). Pertwee appears to be completely comfortable in his role and delivers all the material included in the story with ease. He also gets to indulge himself in some fisticuffs with the Ogrons and discuss high minded moralism with the Daleks' human servant, the Controller. We also get to see some great set pieces which demonstrate that was a story which had some money spent on it. But the best sequence that we see concerns the Doctor and Jo on a quadbike trying to avoid squads of Ogrons, all of whom are shooting at them. This story is also notorious for the leisurely invasion of the past country house by the three Daleks. 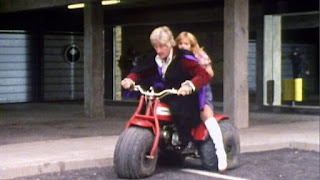 As I have stated above, the problem with this story comes from the Daleks themselves. While it is nice to see them for the first time in colour here, they lack all credible threat from the weak voices provided by Oliver Gilbert and Peter Messaline. They sound like the BBC had forgotten what these metal meannies were supposed to sound like. Luckily this is rectified if you watch the DVD which offers a special edition version of the story featuring Dalek voices from the modern voice of the Daleks, Nicholas Briggs. When we listen to the orginal voices for the story, the Daleks lack the sense of hysteria that they had in the sixties.

But somehow, somewhere this story has 'Must See' written all over it. And it is a good little story that gives us a great plot that the show hadn't done before. Nowadays, the idea of paradox's is on every science fiction show but here it felt like a new and fresh concept that was just perfect for Doctor Who.

Yes, Day of the Daleks is a good story but is it a triumphant return for the Daleks?