Doctor Who: The Underwater Menace Review 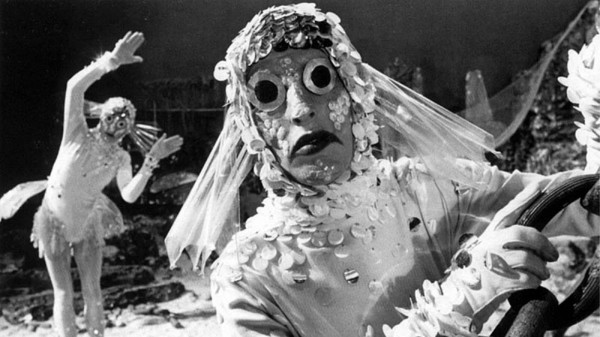 The Underwater Menace suffers from the syndromes as The Gunfighters does. For almost as long as it has been around, fans all over the world have heralded it as one of the worst stories the show ever made. I'm not going to tell you it is one of the best because its not. But by no means is it one of the worst. It's the sheer stupidity of the thing and the ballsy way it goes about it that makes it fun, and the two surviving episodes are just that, fun.

It is true that it is one of Doctor Who's more stupid storylines. Its about a really mad scientist, Professor Zaroff who has gone into hiding on the lost continent of Atlantis and has convinced the people of Atlantis that he will once more raise it to the surface when in fact he simply wants to destroy the world. It seems his only friend is his pet octopus and he nearly turns the Doctor's companion Polly into a fish. Get it, it's barmy!

From the get go, the whole thing makes no sense whatsoever. While the Doctor doesn't know where they are, Polly makes an educated guess thanks to some badge she sees but its not concrete evidence. But when the Doctor, Ben, Polly and Jamie are about to be sacrificed to one of the Atlantian gods, they are given some food. It is the Doctor who tells their captors to give a note to Professor Zaroff. Did he deduce where they were purely on some food?

Receiving the note Zaroff asks the Doctor what he knows but the Doctor responds saying he doesn't know anything. To any 'sane' person, that would have a been a oh well moment and let them be sacrificed but no, Zaroff continues to tell the Doctor all of his intentions and what he wants to do to the world.

While we are on the topic of Zaroff, whenever The Underwater Menace is mentioned to Who fans, the first thing that pops to mind is the acting from Joseph Furst, who was considered to be one of the worst actors to have ever appeared on the show. But what is a bad actor? Is it someone who misses his cues, struggles to get the correct words out and is very clearly 'remembering' their lines to the point where they don't say them in the correct tone? Is it someone who seems to chew the set? If so then sure, Joseph Furst is a bad actor.

But, if your idea of someone who is a good actor is someone who can embrace their role and make him believable, is colourful in his portrayal and grabs your attention from the first time we see him, then Joseph Furst is a great actor.

Joseph Furst has his good and bad moments but there is no doubt, when I watch him I believe he is a mad scientist. Forget all this naturalist acting we see nowadays, his over the top and often pantomime style of acting really makes us believe he is crazy and he is really fun to watch.

One of the most shocking things I think this story does is the scene where Zaroff kills one of the TARDIS crew's allies with a pitchfork and jabs it through his chest. While he don't see the actual thing piercing the flesh we do hear it and then the handle continues to linger in the centre of the screen and it really hammers home that although this story is completely daft, the world the characters are inhabiting is really, really dangerous. 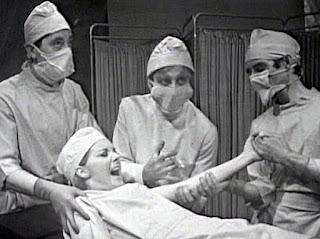 While it is clear that everyone in the production is trying to make the best out of what they have been given, and it is clear from the behind the scenes documentary on the DVD release that the production was a troubled one. The sets look cramped, the dialogue obviously shared out between Ben and Jamie with both of them saying things that aren't suited to their characters and riddled with sometimes 'bad acting'. But does that let it stop being fun? No. It has to be one of the maddest stories in Doctor Who's history. Let none of the bad press stop you watching and lets be honest, even enjoying the story a little. Even the Fish People, while they wouldn't scare the skin off a rice pudding, aren't that bad...

However, it is evident that this story shouldn't have been called 'Doctor Who'. It should have been called 'The Professor Zaroff Show'. Whether you think Joseph Furst is a bad actor or not, he will keep you entertained throughout.

What The Underwater Menace does is try to push the show in a bold new direction and the whole production screams at us, "NOTHING IN ZEE WORLD CAN STOP ME NOW!"