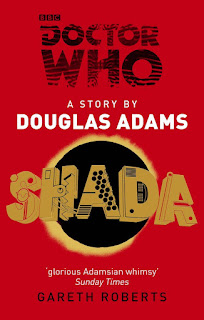 Every single creator has one thing they don't finish. Authors like Dickens have The Mystery of Edwin Drood while some one like Bruce Lee never finished Game of Death. It is inevitable that everyone leaves something behind that they wished could have been finished. But for Doctor Who, that was Shada, a story which was commissioned and had all it's location footage filmed and some studio work done before a strike brought the whole production to a stop, the actors finding themselves going to studio doors that had been locked. Shada was written by Douglas Adams, creator of Hitchhikers Guide to the Galaxy and at this point, Doctor Who script editor. It was a story that was supposed to bring series 17 of the show to an end. But it never happened. The strike that occurred was over a dispute about a clock on a children's show and it is perhaps ironic that Doctor Who was finally effected by...time.

But, like a ghost who won't stay dead or an itch that won't be scratched, Shada has popped up over the years of the show in many different forms. Clips from it were used for The Five Doctors, the 25th anniversary episode from 1983, Tom Baker provided linking narration when the story was released on video and Lalla Ward returned, this time alongside Paul McGann in the Big Finish audio remake.

It is also no secret that Adams, didn't like this story and cannibalized it for another book of his, washing his hands of it. He even refused to put his name to the video release and claims he was eventually tricked into doing so. He wanted nothing to with it. But his death in 1991 finally put an end to the wish that he would adapt his work into a novel leading this adventure to become another that had been "lost".

So, Shada, like the prison in the story, had been largely forgotten about, it still existed in some shape or form and it was relegated to the position of a myth...

But now, or rather from 2012, Shada is back, this time in that novelisation form that fans wanted so hard. It hasn't been written by Adams for obvious reasons but by Gareth Roberts, someone who writes for the show and has contributed a number of other Who related novels over the years. When reading this book we can see that Roberts has taken great pains to try and recreate the feel of the Adams era of the show and quite rightly, sticks quite closely to the original material, though he does flesh out some of the characters in a pleasing manner.

There is a missing book which gives the location of a Time Lord Prison called Shada, but the book is missing and the location is desired by a madman called Skagra. Skagra wants to find an old outlaw who could bend minds to his will called Salyavin and conquer the universe. The book in question is in possession of one Professor Cronotis, a Time Lord who has retired and set up residence in the halls of Cambridge. Interrupting a visit by the Doctor and his companion Romana, Skagra takes the professor's mind and takes the book. The Doctor, Romana and K-9 set off in pursuit joined by Chris and Claire, a couple of young grad students who haven't fully accepted their not-so-complicated relationship!

Given the breezy way that Roberts approached his television scripts in particular those for Unicorn and the Wasp and The Lodger, it seems logical that it is he who took up the mantle of novelising this lost adventure. It is clear that he loves the show and the material he is working with here. He throws in some continuity references and Doctor Who in-jokes, where and when they are needed. He name checks a number of his enemies, including the Meddling Monk and gives a possibility for a further story including, the Interfering Nun! But most importantly, Roberts manages to successfully recreate that relationship that the Fourth Doctor and Romana had on screen and what makes them a constant fan favourite.

However, this is where I'm going to be really critical, no matter how faithful Roberts' novelisation is, Shada itself suffers from two unfixable problems. One, like Adams said, Shada is a slight, hastily conceived idea that came about when he was losing interest in his work on the show. Secondly, this isn't an Adams novel. Now, I have never read Hitchhiker's Guide, but this book could have perhaps been a lot more had the original author wrote it. That is not to say that Roberts doesn't do a good job, I just think that one of the reasons why the original Target novels worked so well was that for the most part they were written by the original authors, the person who knows the material best. One of the things that made Adams one of the greatest writers, not only of his generation but of any, was his ability to look beyond his quips. Lurking under those quips was an insightful look into the human mind and human nature and a slow burning anger at the fact that everything in the universe eventually ends, that was what gave his writing it's weight. Unfortunately, Robert's writing just doesn't come close to Adams'. Shada ends up suffering from the same cheap sentimentality that Roberts' scripts so often do and the jokes aren't especially funny. In fact, they end up being really, really repetitive.

While there is no denying this is a great book, one that Who fans or fans of Douglas Adams should purchase, Shada is unfortunately no longer interesting. There seems to be only one person who has the power to travel back in time and save the day, giving us the television version. But that person is fictional...

SHADA, ORIGINALLY WRITTEN BY DOUGLAS ADAMS AND ADAPTED BY GARETH ROBERTS WAS RELEASED BY BBC BOOKS IN 2012.