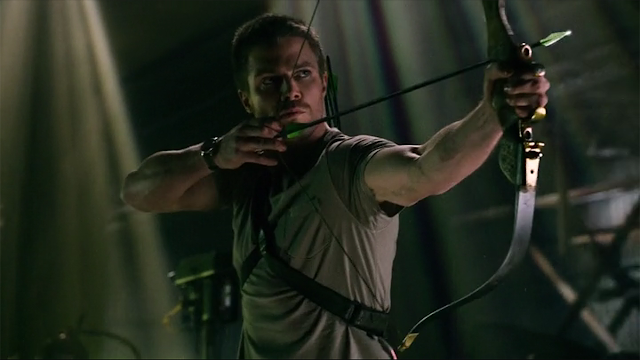 Recently I decided to re-watch Arrow, in my quest to re-watch all the different series I have on DVD. Arrow came close off the heels of Smallville, a series which focused around Superman and his origins but one that also featured Oliver Queen, The Green Arrow's alter-ego in it's later seasons. As someone who grew up with Smallville I remember coming to this series with a little trepidation. I didn't know if anyone could replace Justin Hartley's interpretation of the character. You can imagine my surprise when I found myself really enjoying Stephen Amell's performance. Not only is he great as the character but within the first few scenes he is, Oliver Queen. Bravo.

Now comes the hard part, trying to remember my thoughts about the series when it first aired 4 years ago!

At the time when the series premiered, there was a lot of buzz about it and I am pleased to say, this opening episode lived up to the hype. The CW usually aim their shows for a more teenage demographic but Arrow is aimed at a wider audience, sure there is plenty here for younger viewers to like but it also hits the mark with comic book fans, such as myself, and older viewers, yes I watch Arrow with my mother, she has no idea what is going on but she seems to love it! In fact, the only thing that slightly annoyed me was the ever-so-slightly over earnest voiceover at the beginning to every episode but I understand that it is needed for new viewers to understand what has been going on. The rest of the show is dark, gritty and good fun and we can see that the showrunners were well aware of the audience's need for realism. In a nutshell had Smallville and the dark Batman movie trilogy had a child, Arrow is what it would have looked like!

Arrow's premise is that billionaire playboy, Oliver Queen has been stranded on an island for five years after his boat goes down of the shore. He is rescued and finds himself plonked back down in Starling City, his home that he now sees for what it is, corrupt. He becomes the Green Arrow and decides to take down everyone who "fails this city". I was surprised to note that the name, Green Arrow isn't used until the fourth season!

We meet Oliver the moment he is rescued and only get to see his life on the island through a series of flashbacks that occur through each story of each season all linking together. While this is something that could make the show a success in the future, I found these flashbacks where nothing in particular happened apart from Oliver being captured, escaping and being captured again, slightly dull. But it is the inclusion of the Queen family that is the biggest departure from the mainstream comic book origin of the character.

Here, Oliver Queen has a family. In the comic books he was an orphan but here, pre-island Oliver has his mother, father and sister. While his father, Robert Queen, doesn't last too long in the opening episode, his influence is what proves instrumental in Oliver setting himself as the Arrow. In fact the scenes between Oliver and his father on the life raft are some of the best scenes in the episode. But it is Moira Queen, his mother who is the most mysterious and the opening episode sees her have her son kidnapped to find out what he knows about the boat going down. This sets her up nicely to be a potential villain for the end of the season. That was what I certainly believed.

But it is Thea Queen, played masterfully by Willa Holland who is my favourite supporting character and her obvious acting chemistry with Amell really helps to sell the idea that they are brother and sister. Comic book fans know that Oliver didn't have a sister but here, even though she is written as a spoilt, rich teenager, there is some underlying storytelling that sets up nicely to be a potential hero in the future. Of course that is what happened.

Katie Cassidy who plays Laurel Lance is unfortunately the weakest thing about this plot. It's not Cassidy's fault as she managed to win me over but she isn't given the best material here. It seems her only job is to turn up and be angry at Oliver and not contribute anything else to the plot. I know she goes on to do great things but she hear she runs a thin line and the material threatens to push her over. But make no mistake, Cassidy is great to watch and her chemistry with Amell could be Laurel's saving grace.

But there is no arguing that the best thing about this show is it's star. Stephen Amell looks like a big guy and looks like he could easily kill someone as he plays the damaged superhero extremely well. I was pleased to see that the network didn't shy away from taking the violence as far they were allowed. In some ways, the lack of restraint when it comes to violence on television series like this is refreshing. The fight scenes are also what will make this series stand out, with their excellent choreography and camera techniques. Of course, the violence is balanced out nicely with humour, in particular, the scenes where Oliver gets away from his body guard, Diggle, played wonderfully by David Ramsey.

I remember coming away from this opening episode, completely and utterly won over by a series and it's stars when I completely believed it just wouldn't work. Oh how wrong I was.