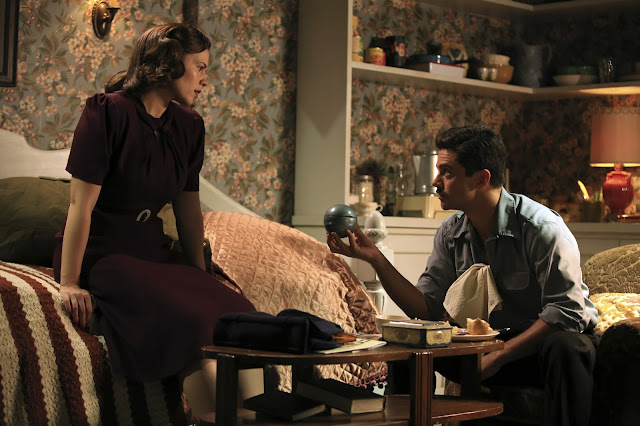 I have to admit that this episode feels a little clunkier than the previous episodes have been, especially in the first half. Previously, Agent Carter has featured some great comedic moments but in this episode, those comedic moments aren't funny and feel a lot heavier handed. Things like Howard's face being covered in lipstick marks and Jarvis's ear tugging when he is lying is supposed to funny but it doesn't come across well. It also stood out because he hadn't done it in the last episode when he was lying through his interrogation so it doesn't feel right.

But there is a superbly creepy villain in the form of the mysterious Mr. Mink, who casually kills his underlings when they fail him. He shots them while telling them that he will deal with Peggy Carter himself.

What was also good was the chance to get to know some of the other SSR agents a bit better, especially when Chief Dooley went of to investigate a Nazi war criminal awaiting his death sentence and offering him a quick way out through manipulation. It is clear that Dooley has no intention of giving the criminal a quick way out and it really gives us an insight into the mind of the man.

There was also a scene between Thompson and Carter where he asks her why she keeps coming to work telling her that no man will ever consider her their equal, that was well handled. It is this scene that perhaps displays the reason why Agent Carter works so well. Sexism is still a big part of the world even in these supposedly enlightened times and in a world dominated by male role models, Carter gives us someone that woman can look up to and aspire to be which is great.

There were also two big reveals in this episode, the first being what Howard had really hidden inside a device he claimed to bring a city to it's knees and the true nature of Peggy's new neighbour, Dottie Underwood.

For a MacGuffin, the reveal of Steve Roger's blood was a good one. It gave the series a real connection to the wider Marvel Universe beyond Peggy Carter and the heaviest hitters from the comic books. It also gives us an important and emotional resonance with Peggy that feels completely real and one that the viewers can really believe in. Both Haley Atwell and Dominic Cooper shine in the scene where Peggy confronts Howard in her apartment about the blood.

And for the Dottie revelation, that really benifited from the fact that series is short as it was the episode after her introduction that made her show her true colours, as least to the audience. She pulls some ninja moves off on Mink when they have their little confrontation. Sure, Mink was super creepy but the creep couldn't beat the badass that was Dottie! Now we know Dottie is a baddie but not who she works for.

I noticed online that some fans had thought that maybe she would turn out to be Yelana Belova the other Black Widow in the comics. I really hope that somewhere down the line this turns out to be true as she pulls some serious Black Widow like moves here. Even if she isn't Yelana in disguise, I am excited to see what else Dottie gets up to! 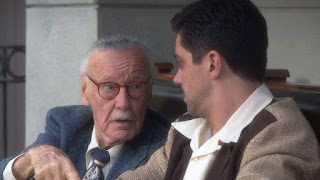 It is true that this episode had some moments that hurt the pace of the story but it gave us some great character reveals instead and allowed us to get into the heads of the men working at the SSR making the department feel more real. But the Dottie reveal was the most exciting thing about this episode. Oh and we get a nice little Stan Lee cameo!