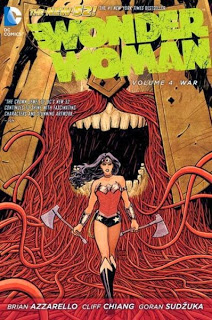 The great art in this volume from Cliff Chiang really makes this book worth picking up, especially as the story moves to some of the more exotic DC locations, it is interesting to see him take up the challenge. But, despite some nice little character moments, the actual plot that binds the issues collected in this volume is quite thin and because of this, it does feel like a middle of the series book rather than an exciting story on it's own that ties in the with the overriding story arc it comes from.

The fourth Wonder Woman book from The New 52 series involves a group of Olympian gods, once again, trying to steal the baby that is in Wonder Woman's care. Diana's band of merry men encounter and fight the First Born, retreat and then return to fight him again. There isn't much else that happens in this book, it is mainly a remake of events that happened in previous volumes. The First Born fights Poseidon, in an almost identical battle that finished the previous volume, Diana fights Artemis again and the end of the book is another battle between the pair split across two issues. The danger here is that author Brian Azzarello is repeating himself, that danger is ever present throughout this book.

The high point of this book is the appearance of is the fourth issue, #22 which takes a trip to The New God's, New Genesis which gives artist Chiang plenty to do. I also liked the reappearance of the Jack Kirby dots and the art here should keep any fan happy.

Whereas Orion has come across as quite plain in previous volumes, here, not only do we see him fighting but we catch a glimpse of his true face in a nice little nod to the pre-Flashpoint character we know him to be. But as much as I enjoyed seeing The New Gods here, there was also an element of repetition with it. The 'revelations' that Azzarello teases us with are no different from the revelations shown in the Jack Kirby run of the characters. There is no mystery or suspense here as the revelations aren't really revelations as most of the readers will already know about them!

But, taking the story collected here on it's own merits, the climatic battle showing zombie warriors attacking the First Born's tropes is exciting and I will look forward to, when I pick the books up, seeing how Azzarello will negotiate Wonder Woman's symbol of peace philosophy when she is now the new god of war at the end of this book.

Wonder Woman: Vol4 - War is an interesting book to pick up if only for the art work and not the story so much. Nevertheless I would be interesting in getting the next volume of this series because of the cliff hanger we are left with at the end of this one. I get the feeling that Azzarello's Wonder Woman series isn't bad, it is just bogged down slightly under the weight of the character.