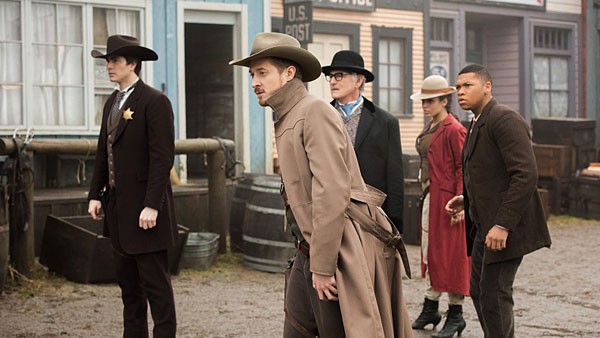 Something that I've discovered while watching the first season, I live in the UK so we are behind where America is in the season, is that Legends often works best when it strays from it's A-plot. Sure, I've got no problem with the team trying to take down the tyrant Vandal Savage, but he has featured so heavily in the first half of this season, the show needs a few episodes where he doesn't feature. It's nothing to do with the character but the season needs a few light moments, moments like this episode, The Magnificent Eight where Rip Hunter takes the team to the Wild West town of Salvation and comes across the iconic DC comics gun slinging hero, Jonah Hex. 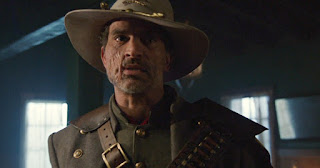 It is a shame then that Hex acts quite strangely and doesn't get too much to do besides saving the team at the beginning. Still, actor Jonathan Schaech brings all the grit, grumble and gristle a character like Jonah Hex needs. I really liked him and hope we see more from him soon.

After Hex saves the team, Ray Palmer, The Atom, decides to become the sheriff of Salvation and a shootout is left to give Rip Hunter something to do. Throughout the story, I found it fun to watch actor Arthur Darvill back in the wild west scene, the last time he did something like this he was the Doctor's companion Rory in the Doctor Who episode, A Town Called Mercy. Though here is a lot more grumbly that Rory was at being in the Wild West! I was surprised to find that there was no origin story for Jonah here, it was just assumed that the audience would already know who this character was. I would have found his story a lot more interesting had the reason his face looks burnt is because the Legends were in town. But this is not a bad enough reason to make The Magnificent Eight a bad episode. 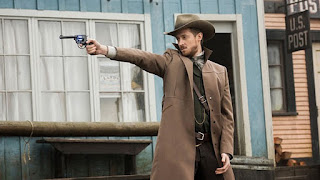 This episode included some great character moments. I liked the idea that Rip Hunter had already been to this time and nearly stayed and we find out Jonah Hex is the reason why he wears big coats. (Here I was thinking that the producers wanted to make him look like David Tennant's incarnation of the Doctor!) What was also a nice touch was to see a past version of Kendra, in the form of an old woman who lives just outside the town of Salvation. This ends up putting more pressure on Kendra's and Ray's relationship.

What I really, really liked was that Martin Stein, one half of the superhero Firestorm saves the life of a little boy who will grow up one day to become world famous author H.G. Wells. However, at around this time, he and his mother were living in a house called Uppark in the UK, not too far away from where I live. But that doesn't matter, as this is a time travel show, I'm sure that there could be an explanation as to how he could be in two places at once. Though I have to admit, when he said his name was Wells, I immediately thought he was going to be some relation of Harrison Wells from The Flash. These are the kind of Easter eggs I like in these shows! I wonder if H.G. Wells and Harrison are related somehow after all... 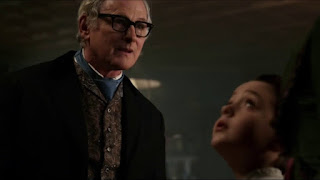 But, for all these character moments, the episode itself isn't perfect. The Wild West is something just about every show does after a while, Doctor Who, Supernatural even Red Dwarf did one. I feel that the setting has been done too much and as someone who isn't too interested in cowboys, I often find these episodes dull. Nevertheless, I would rate this episode quite highly, It's better than the Supernatural and Red Dwarf episodes, but Doctor Who always has been and always will be my favourite show so I find that episode better than the Legends one.

But I still think that the episode could have used Jonah Hex more. Like I said, Schaech did a great job but I would have like to see him do more. Maybe he will be back, I really hope so. He may even join the team, that would be great!

What was also a great shame was the futuristic laser fight at the end, where the baddies the Time Masters sent after the team arrive and try to kill everyone. It let the episode down a little as it was over and done with in a few seconds flat. Plus, at the moment, super laser fights have been done so often in Legends, it's stopped being interesting. I hope the last few episodes bring some new ideas to the table.

Overall, The Magnificent Eight probably won't be considered the best episodes of the series but, will it be considered one of the most fun?
The answer is hell yeah!