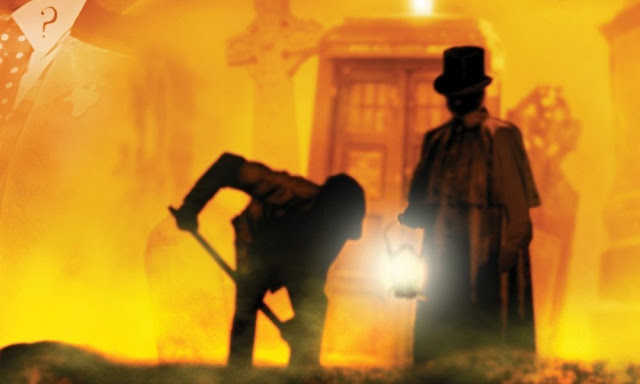 According to the notes included inside the booklet for this audio adventure, author Robert Ross wanted to write an historical adventure which he could spin as a horror story, the result, Medicinal Purposes.
Originally he chose Jack the Ripper but, the producers at Big Finish, rightly so, believed that that historical figure had been overdone. When the TARDIS arrives in a dark tunnel, it doesn't arrive in London in 1888 but instead in Edinburgh in 1828 where, William Burke and William Hare, William and Bill in this story, discover that body snatching can be just as lucrative as real work and they go to the darkened graveyards and uncover corpses for £10, a lot of money back then, a head. This story also conveys the Doctor's companion Evelyn's shock well that the Doctor is relatively shameless in his urge to meet historical figures.
At one point Evelyn says to him, "You talk about Burke and Hare as if your looking forward to meeting them! Their criminals, murderers!"
To which the Doctor responds, "Maybe not yet."

But this story plays around with the concept of time, meaning that Burke and Hare aren't necessarily the murderers, oh, people are dead alright, but they haven't been used to advance medicine under the scary scalpel of Doctor Robert Knox, instead they have been carted off by a baffled police force. And Burke and Hare insist on not knowing each other. Something has gone drastically wrong with time and it is up to the Doctor and Evelyn to put things right even if it means becoming accessories to crime.

When this story was released in 2004, the most commercially famous actor attached to it was Sir Leslie Phillips who plays Robert Knox. But this story features not one Doctor, Colin Baker, but a future Doctor, although he wasn't at this point, David Tennant. It would be the year after this story that he was announced as the Tenth Doctor making his first appearance in The Christmas Invasion. Tennant plays Daft Jamie, a character that the audience connects with throughout the story despite one of the last victims of Burke and Hare, in this story and in historical fact. Historically, Daft Jamie was quite popular around where he lived and probably had what we now know as autism. In this story Jamie is an outcast but is friends with Mary, a local prostitute, though nothing happens between the two of them, and Tennant sounds completely convincing and never does he tread into impersonation acting, we believe this is a character with autism and his friendship with the Doctor and Evelyn is so well handled it really is beautiful. This makes the ending that much sadder when, to put the timeline right again, the Doctor has to drop off Jamie telling him everything will be alright but Evelyn works out that just round the corner is Burke and Hare, both waiting to murder Jamie.

The other members of the guest cast are also excellent. Sir Leslie Phillips is really creepy and sinister as Doctor Robert Knox who is keeping secrets like why his house can appear and disappear. Glenna Morrison is instantly likable as Mary Patterson and her friendship with Jamie develops into an unrequited love story. You really get a sense that Mary quite likes Jamie as a friend though Jamie probably fancies her a little. This makes it all the more saddening when we hear Jamie hear Mary's murder and his screams will bring a tear to your eye.
Tom Farrelly and Kevin O'Leary are totally engaging as William Hare and William Burke respectively. We really get a sense that they don't believe themselves to be horrible people, just people trying to make their way in this world. But as Doctor Who has shown us time and time again, it is often the human race who are the greatest monsters.

Colin Baker and Maggie Stables are wonderful as The Sixth Doctor and Evelyn. I came to the Evelyn era of stories quite late and sadly she passed away just as I was getting into them but she is really great and gives us a well rounded character who doesn't take any nonsense from her Doctor!

Ultimately though, people who don't just buy this story because it has David Tennant in it will be getting a story that is really well rounded and one that fulfils Ross's original premise, it's horrifying, laced with plenty of dark humour but really, really sad with a few extra-terrestrial bits added in for good measure.