Doctor Who: Planet of the Rani Review 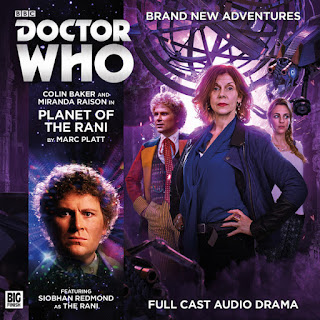 The story is a fantastic example of something that Big Finish has always done well. It takes a small piece of continuity, in this case the planet Miasma Goria, only refered too in a couple of passing lines in the television adventure Time and the Rani and crafts a story around it that fits perfectly in the Sixth Doctor era. But, in classic Big Finish fashion, starting the story on Miasma Goria would be too simple, the story starts with the Rani having to escape from the prison the Doctor put her in at the end of the last story, The Rani Elite. But then, she doesn't arrive when she meant too.

For the most part, in the same way The Magicians Apprentice/The Witch's Familiar paired Clara with Missy, Planet of the Rani pairs the Rani with the Doctor's new companion Constance Clarke. When the Rani finally returns to Miasma Goria she discovers there is a new ruler, Raj Kahnu played by James Joyce. Serving as the Doctor's companion for the majority of this story is the criminal Pazmi who has devoted her life to the death of the Rani because of the experimentation the Rani has done on her people. It doesn't take the Doctor and Pazmi long before they are on the trail of the Rani and Constance.

On Miasma Goria there is plenty to interest the listener but nothing more than the new ruler of the planet Raj Kahnu who quickly meets Constance. What this story does very well is putting the characters in odd pairings but allowing these pairings to show different angles on our characters. For example, the pairing of Raj Kahnu and Constance Clarke allows us too see that she is not only a no nonsense, get on with things kind of person, she also has the ability to see past the superficial. This is excellent writing from author Marc Platt. But we would expect no less from him.

As ever, Ken Bentley's direction is spot on and the excellent music scape helps to paint scenes perfectly.

Overall this is another enjoyable outing for the Sixth Doctor, the one incarnation that Big Finish has really allowed to develop beyond what he was on television. Miranda Raison as Constance Clarke continues to shine and nothing would surprise me if she becomes one of the most popular audio companions! What really surprised me was that the inclusion of the Rani only helped the story move forward rather than her becoming a major part of the plot. I really liked that different aspect.

PLANET OF THE RANI, WRITTEN BY MARC PLATT AND STARRING COLIN BAKER AND MIRANDA RAISON WAS RELEASED BY BIG FINISH PRODUCTIONS IN NOVEMBER 2015.