Doctor Who: The Peterloo Massacre 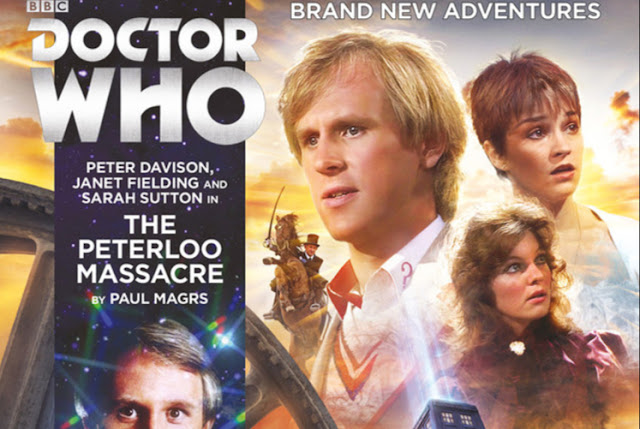 There is nothing like starting a story off with the TARDIS crashing to grab someone's attention followed by the Doctor uttering those immortal words usually only uttered by his companions. "I seem to have twisted my ankle". The author already had me invested in this story with this simple reversal of roles, who knew that Time Lords could twist their ankles?

The Doctor, Nyssa and Tegan are found by a man called Hurley when they are wandering around the grounds of his house. It is quickly apparent that Hurley isn't the most likable man in Manchester but it is these sorts of people who seem to thrive. He is bossy but not incredibly impolite to his servants and his new guests in an obvious attempt from the author to give the man some sort of redeeming quality.

I really related to Tegan throughout the story who is disgusted by the idea of servants at all no matter how happy they appear to be. It is this disgust that immediately causes some friction between the Doctor and Tegan. The Doctor, although we know he isn't, almost seems content to let servants run around after him because this is history. Tegan however doesn't, she seems to resent Hurley especially in the opening scenes where he makes one of his servants get him his alcohol despite the bottle not being more than two feet away from him. Tegan also accuses the Doctor of being a 'Posho' a kind of person who would want servants because she has heard all about Gallifrey. This is a great reason to love Big Finish and the work they do, they add beliefs and resonings to our favourite characters and continually make them rise above the plot devices they were on television.

One of my favourite type of villains appear in this story, human beings. The people in this story aren't necessarily baddies, they are just people trying to make their way through the difficult times that the Industrial Revolution held. There is a scene towards the end of episode one the shows how ruthless people like Hurley are and how much they lack compassion. As awful as this may sound I really like it.

The second episode splits the crew up, Tegan goes off with Hurley's son William, Nyssa goes off with the servant Cathy, while the Doctor is stuck with Hurley while trying to find his friends. There is a real sense that this is because all the characters are being put in their place ready for the action that takes part in the subsequent episodes. Tegan learns that William and his father work for the local Militia and Nyssa learns that Cathy, a servant at the Hurley house has been asked to be the head speaker at the rally that she fully supports. There is just one problem here and that is, for all Cathy is going on about the rally, she seems far too over confident and that sometimes comes across as arrogance. I don't know if that's just me but she seems to really believe that the rally will make a difference for people like her.

The story then shifts to the day of the Peterloo Massacre with the Doctor and Tegan being reunited, overlooking the field where the rally is being held. The Doctor quickly gets Tegan up to speed with what is happening and it doesn't take them long before they are scanning the crowds for Nyssa. But with 80,000 civilians taking part in the march, it becomes apparent they are looking for a needle in a haystack.

Once we are introduced to the ghastly Reverend Small, the catalyst of the events that are about to unfold everything very quickly goes to hell. The completely peaceful march quickly turns into a riot, meaning that the Militia are allowed to go in and slaughter the 'rioters' who are unknowingly rioting. Before listening to this story I had never heard of the Peterloo Massacre but as I am not from Manchester, I'm not surprised. However, I was sickened to learn that shocking things like this were allowed to happen. I really think that Doctor Who works really well when it is not three bug-eyed monsters but human beings that are the baddies. It is the reason these kinds of Doctor Who stories are so popular. It reminds us that for all our saying we are good, the human race can be monsters too.

When he hear the actual massacre, it really is shocking, despite the cast only being made up of nine actors, the sound designer hauntingly makes it sound like thousands of people are crying out in pain, terror, anger and fear at the carnage unfolding around them.

The end to episode three is truly disturbing but it is a sad truth that in historical events like these, the innocent are hurt, no matter how old you are. It is one of the most disturbing and shocking things that Big Finish have ever done and while the story is all the better for having done it, it really knocked me for six in a way that many of their stories have never done before.

All the cast are fabulous throughout the story including Jayne Standing as Cathy, Robbie Stevens as Hurley and Gerard Kearns as William but the story truly belongs to Peter Davison, Janet Fielding and Sarah Sutton who really seem to raise their game. But it is Peter Davison who really shocks us in this story displaying a true anger and hatred that his Doctor rarely showed us on either television or on audio. It is superb.

The story wraps up nicely in episode four with yet more revelations thrown at us for good measure but it succeeds in making this story a real character piece!

I believe that this story works really well is that some of the factors that led to the massacre are still relevant today. While the working class are no longer servants, there is still a visable line between the working class and the rich and, lets be really honest here, events like the Peterloo Massacre could still happen today.

The Peterloo Massacre isn't a story that I would let young children listen to with the story often being dark, disturbing and complex but it is a great way to introduce listeners to a period of history that they might not know much about and it is full of factors that I believe are still very relevant today.