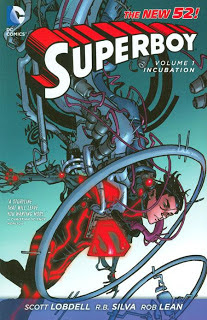 From the little knowledge I have of the DC universe, I knew that author Scott Lobdell was one of the most controversial authors in the new 52 reboot. Was it a reboot? But nothing much as been said about Superboy and that is perhaps because this is a jolly good story which is really enjoyable. All it relies on is a teenager trying to do the right thing but not really succeeding, just like in real life and we have one of the most relatable characters in the DC universe. Also, any fans of the show Young Justice, should be really satisfied with this story!

The reader of this book may experience some form of whiplash after reading this because it shows Superboy a prisoner of his creators NOWHERE, their weapon, he abandons them, re-joins them before he attacks them. All of which is done in really rapid succession. To really show the struggle for his identity, Lobell shows Superboy rebelling against the only parents he knows even as he goes back to them for him to learn how to act. In some ways you feel sorry for Superboy but on the other hand it gets quite tiring super quickly. But, what is perhaps the most striking thing about this book is how Superboy refuses to save every endangered person he meets as he tries to rebel against the 'Super' in his name.

What is apparent fairly early on is that this is quite a narration driven book. This both helps and hinders the story though. While the narration boxes allow us to see what is really going on in Superboy's mind. But in the panels we see Superboy flying over Rockafella Centre, Lobdell manages to cram 20 of the narration boxes in. Now, I don't mind these boxes but I know that not everyone likes them so this is something to think about before you buy the book.

There is no appearance from Superman in this book but his cousin, Supergirl makes an appearance. Incubation is a poorly released book as it alongside the first Superman and Supergirl books which hadn't been released at the time. But despite this, Supergirl is likeable despite being angry and arrogant throughout their scenes. Neither Superboy or Supergirl really fit in, with Superboy under the thumb of NOWHERE and Supergirl fed up with people not taking her seriously as she is dealing with her memories as to what happened to Krypton. These two feel fresher than the old Superfamily we were used to before The New 52 came about. But no doubt their meeting with Superman will be a good read.

R.B. Silva's art works well with Lobdell's storytelling and while sometimes his lines can feel quite cartoonish, it works well with the script. What I really liked was the covers done by Shane Davis. Not only was the art great here, but the chance to get to see Superboy's chest on the final cover was an opportunity that wasn't missed!

All in all, this take on Superboy feels really new and fresh and really slimlined. While only one of the Superfamily appears in this book, it ultimately paves a way for a new generation of fans to fall in love with the character.

SUPERBOY: INCUBATION, WRITTEN BY SCOTT LOBDELL AND WITH ART FROM R.B. SILVA AND SHANE DAVIS WAS RELEASED IN 2012.