Doctor Who: The Labyrinth of Buda Castle Review 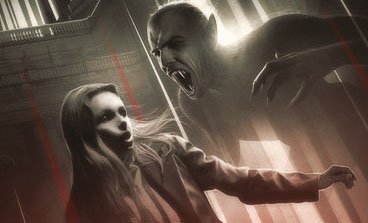 It is really evident that the Fourth Doctor and Romana really enjoy their European holidays. While City of Death took place in Paris, The Labyrinth of Buda Castle deposits the Doctor and Romana in Budapest. Buda Castle obviously borrows from City of Death but instead of finding the Jagaroth there is a vampire stalking the streets and if there is one thing that Time Lords don't like, its vampires...

From the very opening scene, the play obviously has been influenced by City of Death with the Doctor and Romana jogging through the streets and taking in the sights. The Doctor is talking about the different buildings and Romana is being pedantic when it comes to his musical quotes. One of Big Finish's best comedic writers, Eddie Robson provides a script that clearly is influenced by the stories written by Douglas Adams and while they aren't as funny, I don't think anything could ever be, he gives it a damn good try and it really pays off. I particularly liked the Doctor's line, "I do enjoy meeting tiresome men, I get so few opportunities to be properly disdainful these days."

The horror of this story is less alien in origin and more horror with the vampire stalking the streets and setting its eyes on Romana. Actor, Mark Bonnar, recently the Eleventh in Doom Coalition, is quickly becoming Big Finish's go to villain achieving to be distinctly disturbing as the vampire. Even when Zoltan Frid is in his human guise he is unsettling thanks to his attitude. While Doctor Who has done vampires many times before, I feel Robson and Bonnar on the while mythos is as original as it is really spine chilling!

The story is full of fairly memorable characters, in particular Celia Soames, a British vampire hunter whose character feels very similar to that of Duggan. Soames is skilfully played by Kate Bracken and she manages to hide Celia's secrets well throughout the story. I didn't see the character's revelation coming! But we don't get to spend much time with the characters native to Budapest as most of the action takes place in the labyrinth under the city. The story doesn't really capture the spirit of the city in the same way City of Death did.

But, The Labyrinth of Buda Castle is a really fast paced adventure that carefully manages to balance its humour with the vampire mythos spread throughout this story. No doubt that fans of the Fourth Doctor will be absolutely delighted with this release.

THE LABYRINTH OF BUDA CASTLE, WRITTEN BY EDDIE ROBSON AND STARRING TOM BAKER AND LALLA WARD WAS RELEASED BY BIG FINISH PRODUCTIONS IN FEBUARY 2016.