Doctor Who: The Dalek Invasion of Eath Review 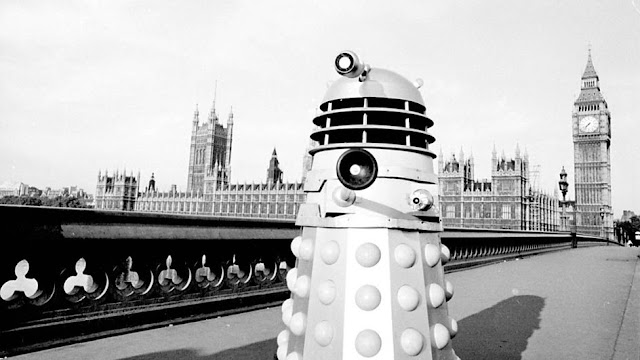 When talking about what the essential stories from the entire history of Doctor Who, it is easy to throw about any of the titles but The Dalek Invasion of Earth has to be in there somewhere.
It is one of the most essential stories you can watch from the long history of the show for a number of notable firsts including the first companion departure. This story see's Susan, the Doctor's granddaughter, leave to make a new live with David Cambell, the man who, over the course of the story, she falls in love with.

Perhaps what is the best thing about this story is it shows the Daleks as a truly terrifying force which wasn't really portrayed in their first outing. This story sees them as the masters of earth and no one can stand in their way. Well, until the Doctor and his companions, Ian, Barbara and Susan arrive that is.

From the get go the story is totally engrossing whether it is thanks to the shocking side of someone commiting suicide after going insane from the mechanics in his head or the stricking poster on the wall behind him telling us that it is forbidden to dump bodies in the river. This story has a dark, gritty edge to it and shows the earth's population as little more than fractured groups all of whom desperate to survive in this harsh world they used to call their's. Whether you are one of the freedom fighters, a slave of the Daleks or some of the other characters shown in the story there is a deep sense of mistrust and friend can become foe at any moment. This instance is shown at its most graphic when the man Ian befriends meets his brother. His brother has been converted into a Roboman, a servant of the Daleks and when he tries to reach his brother both are killed in a skirmish. Its quite shocking.

However, what of the Daleks themselves? Sure they are shown as the strongest force on Earth but are never shown as anything else in this story. Not really, while the cliffhanger to the end of episode 1 is suprising and has gone down as one of the most iconic moments in the show's history, the Daleks do very little more than rant, make plans and scream their universally known battle cry EXTERMINATE!
Its a shame because the Daleks could have been given some more depth and become something more than a machine. In fact they do much the same as they did in their first outing, make plans. Plus, why do they need to move Earth anyway?

The acting is great throughout this story and this leads to some very convincing characters being created. While you can see who the goodies and baddies are, these are people who could flip at any moment and there is an element of unease for all the character involved.

But the story really belongs to Susan who really grows up through the story. At the beginning she climbs up a wall in a very adolescent way and ends up bringing down part of a bridge on the TARDIS but all that changes when she meets David Cambell who she falls in love with fairly quickly. Her end scene is tear jerking and I imagine watching this in 1964 must have been quite surprising.
I have to agree with Susan's actress, Carole Ann Ford when she says that Susan wasn't developed enough to keep her interesting. I think that Susan in An Unearthly Child was wonderful but after that she wasn't written quite as well and she suffered being turned into a screamer. Still, I did like Susan and her final scene is heartbreaking.

Overall this is a great story full of marvellous acting, a gripping storyline and some shocking scenery and shows our world at its most inhospitable.