Doctor Who: The Ark Review 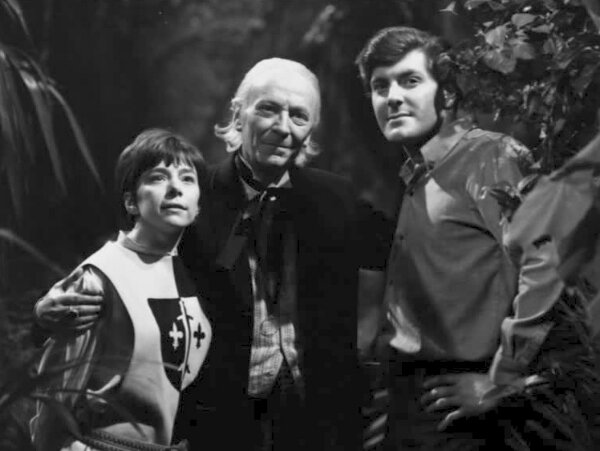 The Ark sees the First Doctor, Steven and new companion Dodo arrive on a large spaceship carrying the remains of the human race who are trying to find a new world to settle on because the Earth has reached the end of its life, see The End of the World for more that. But the humans aren't the only people on the spaceships, with them are their servants, the mute but faithful Monoids.
One of the first things that happens is Dodo sneezes. While this may seem like a trivial but her cold proves mortally dangerous for those remaining humans who haven't come across infections for hundreds of years and therefore don't have any way of fighting it.
Though the Doctor eventually manages to find a cure after Steven collapses while on trial the crew soon depart the Ark.
But their departure is short lived.
Seven hundred years later, they return, or simply a matter of seconds since they dematerialise depending on how you want to look at it. But this time the crew find the human race enslaved by their once servants, the Monoids.

The Ark is a fairly ambitious story especially given the time it was made in. In 1966, television was still a fairly new thing and the technology didn't exist to pull of some of the effects needed for this story but the director, Michael Imison and the regular cast of William Hartnell, Peter Purves and Jackie Lane give it a damn good crack and it really pays off. The story is full of great ambitious sets, a clever, if ill fated monster design and delightful directorial touches. What I was really surprised about is how unnoticeable the shift between studio and film work is. Whether it is because of it's age or good direction I don't know, but those changes are virtually unnoticeable.

Credit has to be given to this story as it one of the first times the show really utilised the time travel elements of the show's premise beyond showing historical events. I think one of the reasons the show works so well is because it works as two separate tales and this must have seemed so strange to 1966 viewers. The cliffhanger at the end of episode 2 must have confused viewers at the time with the TARDIS leaving then arriving again only to then show the crew racing through a seemingly empty ark until they see the statue the humans were building replaced with that of a Monoid. This certainly provides a good new puzzle for the TARDIS crew to find themselves in familiar territory but don't know anyone because they would have died several hundred years ago.

The story evidently owes a lot to HG Wells with its obvious homages and it borrows from various other sources of science fiction, for example the idea of the last of species on a spaceship looking for a new world has been used before but it is used to great effect here.

Given the time the show was made the story is fast and snappy and doesn't hang about. The finished product is fun and exciting and is full of excellent production values. Credit is due to the Monoids just because the production team were brave enough to use them. Hartnell's enthusiasm is so high especially in his final year in the role of the Doctor its a shame that many of his stories no longer exist so we can enjoy him more. Peter Purves is great as Steven, a companion who I think is underrated by many. I really enjoy Steven, even if this story doesn't give him that much to do unlike The Gunfighters. I really like Jackie Lane as Dodo. Its a shame that she wasn't given the scope to develop like some of the future sixties girls but she wins us over within her first few minutes of stepping out of the TARDIS!

If I had to choose a selection of stories from the early sixties to show a new fan trying to get into the classic era of the show then The Ark would defiantly be one.

And Jackie Lane, on the off chance you are reading this, you were well brill!