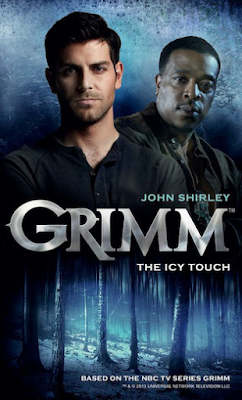 It is a well known fact that tie in novels to television stories can be a double edged sword. While it sure is great to see your favourite characters in print form, novels don't tie into the television series very well and you know that nothing bad can happen to our characters because they will appear in the television show with no knowledge of what has happened in the books and so any sense of true jeopardy is lessened.

However, The Icy Touch is a fantastically gripping enough tale for none of this to truly matter. There is strong writing, which is only to be expected from a respected sci-fi author, in this case John Shirley who does a great job of capturing the characterisation and overall tone of the series. He also creates a whole new villain that really tests our favourite Grimm Nick Burkhardt and his group of friends.
The villain really is a general threat and provides great concern for those who oppose him. It's true that the story doesn't expand any of the Grimm mythology and any of the creatures or Grimm tropes that are in the show proper are mentioned and explained in an unobtrusive manner that really won't upset the die-hard fans of the show, while also appealing to a new audience.

Any fan of the show won't be surprised by the formula this book takes, it follows along the same format as the programme full of killings and red-herrings but with no budgeting limitations, the book manages to achieve a stranger tone than the series it has been spawned from.

One slight niggle with this book is that there is moments when it feels like the author has thrown everything into the book for the sake of it and there are moments when we are forced to wonder if there are more Wesen in this world than actual humans. As usual there is the usual banter especially from and with Monroe and the speech sounds exactly like that from the television series - all that is missing are the actors to say them, (audio series anyone?)

Above all though, this book is great fun and can be read in a couple of long afternoon sittings with each chapter hooking the reader into delving into the next. This book is refreshing and exciting that keeps the reader interested throughout and bodes well for the overall series.