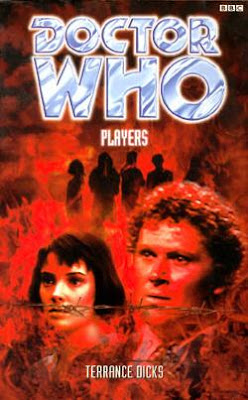 For the 50th anniversary celebrations BBC released a series of Doctor Who books which had one book per Doctor. In the case of the Sixth Doctor it was the novel, Players which was chosen. The book was written by perhaps the best well known author of Who fiction, Terrance Dicks, the man responsible for novelising almost the entire Doctor Who series when the Target novels were released.

In Players, Dicks shows his interest in Winston Churchill by having him a main character in the novel. When we first see him he is a reporter on the fields of the Boer war, then a army officer in WW1 and then what happens with him in between World War 1 and 2.
Dicks manages to weave Churchill and the Who universe into a grand tale of political intrigue and beings who play with wars and major historical events for fun.

At first the Churchill we see is far different from the cigar smoking image that he became. He is a field reporter in the middle of the Boer War trying to make a name for himself. It also becomes clear that this isn't the Doctor's first meeting with the man and on this meeting he aids Churchill in avoiding death by an assassin and escaping from a South African prison.

Dicks also uses the season 6b idea in which the Doctor wasn't immediately exiled from Gallifrey at the end of his second regeneration but was in fact sent on a series of missions for the Time Lords and in this instance we relive a meeting between the Doctor and Churchill in No Man's Land.

With the Doctor's interest certainly piqued as to why these beings seem to be targeting him, he travels to the 1930's and sets himself up nicely in London society. While it is certainly unusual to see our Time Lord gravitating in such social circles it does somewhat suit the Sixth incarnation.
The story travels from the Ritz, to Churchill's Sussex home of Chartwell to a Buckingham Palace Garden Party. All the while the Sixth Doctor not feeling out of place.

Also to be found within these pages is plenty of history. Not only does the story focus on Churchill and his place in history but the plot also begins to coalesce around the 1930's abdication crisis. Dicks makes some interesting choices here by making people German spies and he plays tight and loose with the historical timeline but as a Who novel, history isn't actually completely accurate!

The characterisations are spot on and Dicks achieves what he says in the forward he wanted to do with the Sixth Doctor and get him out of his 'clown suit'. The Doctor's companion Peri also gets a lot to do and Dicks toys with her being American and her understanding of the British royalty and etiquette nicely. Also included with the novel's pages are cheeky little nods to his other works and some characters from other novels pop up plus it is really nice to see what Carstairs and Lady Jennifer have been up to since we left them in The War Games.

The baddies themselves are the Players and they remain largely in the background although the Doctor suspects their involvement fairly early on. We only get a couple of interludes which allow us insight into their minds and how they operate. How they react to the Doctor is interesting also when they consider him to be both a rogue element and a shape-shifter.

Players is not a highlight of fiction by any means but what it is is an enjoyable Doctor Who story from a master of his craft who inserts the time travellers into an historical setting with enjoyable enough results.