Doctor Who: The Fourth Doctor Boxset - The Romance of Crime/The English Way of Death Review 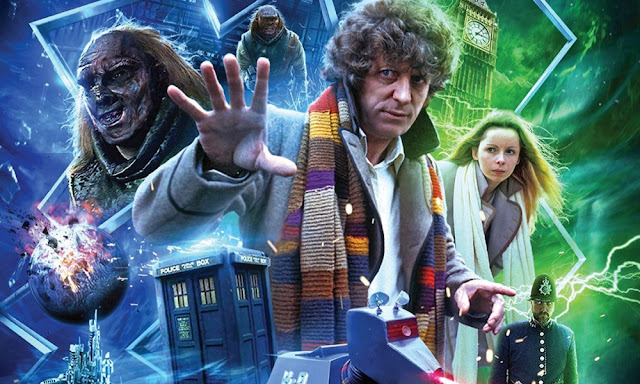 After the success of the first novel adaptation in 2012 with Love and War, Big Finish commissioned a number of novels to be adapted, the first of which were Gareth Robert's The Romance of Crime and The English Way of Death, from the Missing Adventures range of novels.
Both novels feature the season 17 cast of Tom Baker as the Fourth Doctor, Lalla Ward as Romana and John Leeson as K-9 and both releases were sold as either separate stories or collected in the boxset format used for the 50th anniversary Big Finish release, The Light at the End.

One of the things that got me really excited for this release was the return of Lalla Ward. Her incarnation of the Time Lady Romana is one of my favourite companions from the entire series and her return with Tom Baker for the first time in decades got everyone excited.
And they don't disappoint.
Though they actually recorded it separately, the two characters bounce off one another as if 1979 has never actually ended and they are given some of the best dialogue they have ever had either when the characters have been separated and when they are together.
And of course, who doesn't get a tingle when John Leeson delivers his dialogue in K-9 mode? 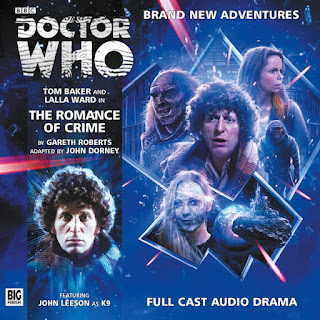 Kicking this boxset off is the story, The Romance of Crime which is set on a prison asteroid in the Uva Beta Uva system where its residents react to situations in a surprising blasé fashion but after the murder of resident artist, Menlove Stokes's assistant, it becomes apparent that something more is going on.
Author Gareth Roberts weaves a deliciously complicated storyline here full to bursting with murder and mysterious masks, Ogrons, a police detective whose family has left him and a massacre of a survey outpost all of which factors in with one another and delivers a script that is both fun and funny but with enough essential seriousness that counterbalances the whole play perfectly and we are treated to a story that utilizes the four episode format to its full advantage and is full of great twists and turns and great ideas oozing throughout.

Unfortunately, none of the supporting cast of characters are anything to write home about and end up as Doctor Who stereotyped characters that are just there and don't really contribute to the plot which is placed firmly on the shoulders of Baker, Ward and Leeson.
While I don't think that anyone will be blown away by character development, the cast manage to pitch the characters exactly right, playing the stereotypes of criminal thugs, beleaguered administrators and evil villainesses, without being anything other than stereotypes.
The stand out performance for me certainly goes to David Troughton as Menlove Stokes who is a character who has turned up in a couple of the Bernice Summerfield New Adventures. He is utterly delightful and hits the humerous note right every time.
However I'm not sure that Graham Seed's character of Pyerpoint comes across very well. He is supposed to be the hardboiled egg type detective but he doesn't quite work and ends up being a joke used to get some comedy into the story which on the one hand is a good thing that should work well for this story but ultimately becomes very tiring very quickly. 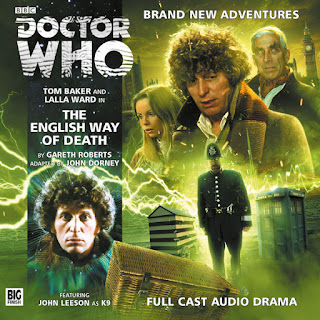 The second story, The English Way of Death features the Doctor overriding the randomiser to return some overdue library books to 1930's England.
The story gets off to quite a rocky start, taking a while to piece all the strands together in an un-boring fashion and apart from a dull piece of exposition in part three, the story is highly enjoyable.
Sometimes, Doctor Who can get into trouble for making their characters too stereotyped with a good example being Moonflesh. You can over stereotype characters if they are funny and not just cardboard thin. This is where Roberts and adaptor Dorney show people how its done and all the characters in this tale just come to life. From the biscuit loving Percival Closed to the gun-ho mystery fiction writer Felicia Chater or the ray gun wielding Harriet to the blustering Colonel Radlett who falls in love Romana the moment he see's her and all the character's story threads tie neatly together at the end in a pleasing enough manner.

As usual the sound design has been handled by Jamie Robertson and Howard Carter both of whom are on top form, recreating the Dudley Simpson seventies Who soundtracks perfectly and thus recreating the said era perfectly too. Their sound design for The English Way of Death is a particular highlight that doesn't distract from the action, a trap that producers Big Finish have fallen into before.

Perhaps the only let down of this release is the interview disc. I must admit, these are pretty dismal interviews full of the usual actor blathering's and boxset adaptor John Dorney only pops in to give a disappointingly short insight into the adaption process.
However, it must be said that it is obvious how much Tom Baker enjoys the recording sessions for these audio releases and his enthusiasm is utterly infectious.

Season 17 of the show has recently gone under re-evaluation from us fans and while stories like City of Death remain fabulous and Nightmare of Eden remain good fun its the more whimsical stories like Destiny of the Daleks, Creature from the Pit and The Horns of Nimon which are still to win me over. Its not that I don't like the more whimsical stories, it just don't like the type of whimsical within the majority of season 17.
However, Gareth Roberts and adaptor John Dorney have shown with these two stories how it should have been done if every story from that season had been of a particularly high calibre and these stories feel like adaptions of un-televised scripts which would have ultimately dominated the entire season.

THE ROMANCE OF CRIME AND THE ENGLISH WAY OF DEATH WRITEN BY GARETH ROBERTS AND ADAPTED BY JOHN DORNEY AND STARRING TOM BAKER, LALLA WARD WITH JOHN LEESON AS K-9 WERE RELEASED BY BIG FINISH IN JANUARY 2015.