Doctor Who: Here There Be Monsters Review 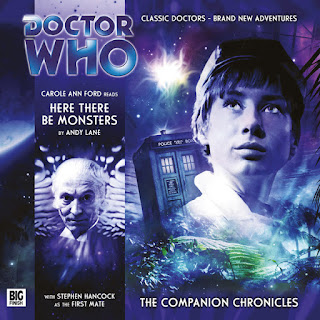 "It was a terrible sound, like someone had just stabbed the universe and it was crying out in pain..." Susan

The third series of the Companion Chronicles range begins with a tale from the First Doctor era told from the eyes of his granddaughter Susan and the story perfectly captures the feel of those early years and the storytelling is spot on.

Almost immediately what struck me was the similarities between this story and those from the early years of the show, 1963-64. The listener can imaging that there are only three sets and a limited cast due to the lack of budget that plagued the show during those early years.
There is virtually no action in this story, the crew walk around the ship and meet Rostrum and from then on it is mainly narration that drives the story to its conclusion and, while I don't like a lot of narration in my audio drama's, it somehow feels right for this story. I don't think that this level of narration would work for any other release.
The characters of the Doctor, Ian and Barbara are side-lined but it is by necessity because this is a Susan story. It just reminds me of those stories where a companion would be missing for a few episodes because the actors had been given a holiday or something!

Ultimately, Andy Lane's story is thought provoking and reminiscent of those stories that weren't straightforward good vs evil ones. Instead this focuses on the Nevermore punching holes in the fabric of the universe to allow things on the other side that could be immensely evil to come through and they view the human's intrusion just a threateningly as we view theirs.

This story marks the debut of actress Carole Ann Ford to the Companion Chronicles and this something that the author, Andy Lane, uses to its full advantage. Not once does he forget that its going to be Susan that is going to be pushing the narrative forward and as a result the story is full of charming little moments between her and the rest of the TARDIS crew. Her comment that while she looked like a fifteen year old girl, she was already older than both Ian and Barbara combined is a nice little touch which fleshes out little comments made in the television series and the character's thought on how she feels she is holding the Doctor back because she wanted to leave Gallifrey with him is an interesting little note that adds to the dynamic between the regulars that we seen on screen.
While Susan ended up being one of these helpless screamers of the companions, despite the fact she was awesome, this release proves to us the potential that the character had and I hope this potential is something that Big Finish will continue and explore in this range.

Ford's narration is also excellent and she neatly seperates the voice of Susan telling the story from the Susan in the story. She does a great Hartnell voice even if the over use of his "hmm's" make her sound as if she needs therapy, she does a great job of portraying his character. Ian and Barbara are also distinctively different from each other with Ford nearly recreating their voices.
However, if there is one problem with 'Here There Be Monsters', it is that the whole story is a slow burner. By the time we get to the climax of the story, it isn't as dramatic as it should be before the whole affair as been too sedate so far.

As usual though, the production is excellent. Lisa Bowerman directs with her ears towards creating an effective atmosphere and this gives the whole production some suspenseful air and mystery with David Darlington's music complementing the story well. Stephen Hancock is good as The First Mate but the only distracting thing is that he sounds too similar to William Russell!

I think that overall, 'Here There Be Monsters' is another good story and successful addition to the Companion Chronicle range and while it isn't brilliant, it successfully recreates the feel of those early years of the show that we cherish so very much.