Doctor Who: The Space Race - Review 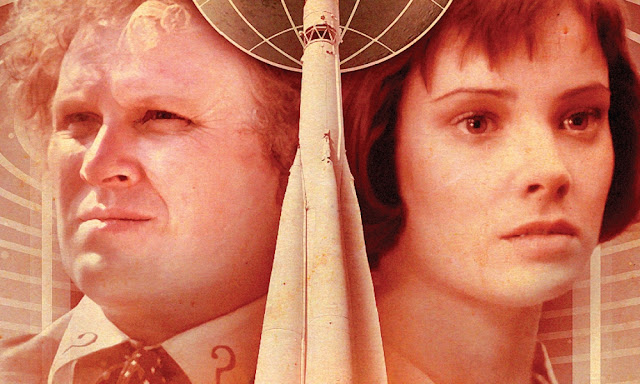 One regeneration after the previous story, Fanfare for the Common Men, the Doctor finds himself back in 1963, his time joined by Peri in a Soviet space centre ready to experience The Space Race. Jonathan Morris' story is a hard one to take in at first. The Doctor and Peri go into a Soviet base and try to help a woman who has found herself alone in space and then with the cliff-hanger for episode one, things take a very strange turn indeed.

That is one of the positives about this story however, its cliff-hangers are fun. Parts 2 and 3 have brilliant ones that aren't so much cliff-hangers as they are something designed to re-evaluate the story as a whole. And what a brilliant story it is, without spoiling this for anyone who hasn't listened to it, things get weird very quickly. I'm not sure what I feel about the stories elements but there are moments when they work and those when they feel a little goofy and silly.

I really appreciated the early space travel stuff, it reminded me of one of my favourite Jon Pertwee stories, The Ambassadors...OF DEATH! Sound designer, Howard Carter even managed to include those little alarm and communicator beeps that they have in the movies but nowhere else! Sometimes things like this can work against a story, three days of journeying to and from the moon do slow things down. All the action on Earth grinds to a halt and it is a shame that this couldn't have been used to add to the drama instead of slow it.

Guest actress, Samantha Beart is very memorable as Marinka Talanov, a lost astronaut who one wishes had more to do with the story. And I applaud Nicholas Brigg's decision for the cast not to have Russian accents and he handles this element of the story brilliantly. The American characters are American characters in a Big Finish story, so what can you do! But I did get confused between the male Russian characters, I took me a while to realise that Captain Kozlov and Sergeant Kurakin were different people!

While this story might not burst with the sense of fun that Fanfare did, there is a real feeling that Jonathan Morris was revelling in the limits of the show. And was there a better way to celebrate the show's fiftieth anniversary than that?