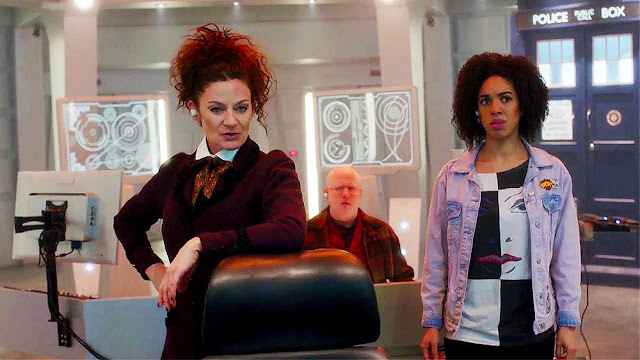 As with many of the two part adventures in the modern era of the show, World Enough and Time has to hold the really good stuff back for the second half and here we only get the smallest taste of John Simm being back as the Master and very little of his interactions with Missy. We also only get a fleeting glimpse of an original Cyberman, complete with their cloth faces and funny singsong voices. Everything that made them so chilling in their debut, The Tenth Planet, is back and its brilliant. And while the revelation that the first ever Cyberman is Bill still packs its heart-wrenching wallop, it is still only a teaser for The Doctor Falls. This episode is Doctor Who on a promissory note, only the second time it has ever been so following the first appearance of Missy in Dark Water. 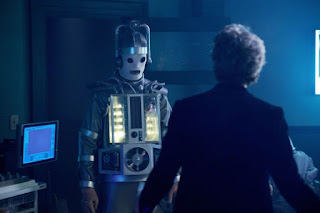 But World Enough and Time is much more fun than Dark Water as there is much more going on and a slower reveal on everything. This is a episode that really bursts with fresh ideas, none more so than the gigantic spaceship having different time zones because its caught in the gravitational field of a mega-black hole. There is also the mad conceit of Missy pretending to be the Doctor. Michelle Gomez pulls this off perfectly making an almost cringe-worthy amount of 'Doctor Who' jokes tolerable. And then there is the horrific plight of those trapped at the bottom of the ship, which manages to get even closer to how a family friendly show should allow us to see of the body horror concerning conversion into a Cyberman. While Rise of the Cybermen/Age of Steel never really found a satisfactory reason as to why people would want to put their brains into a metal suit, World Enough and Time gives us a world and people so riddled with death and disease that conversion seems the only viable option.

Of course, the return of the original Mondasian Cybermen is a gift to us life-long fans - including none other than Peter Capaldi -  who managed to get these monsters from producer, Stephen Moffatt as a leaving present. But I think it is fair to say that viewers of only the modern series might be a little confused as to why these Cybermen are so different. Lets face facts, Mondas isn't the same as Gallifrey or Skaro which were brought into the modern series through throwaway dialogue before their big returns. The original home of the Cybermen hasn't been mentioned since Silver Nemesis in 1988, so there isn't a lot of reason why to believe that modern viewers would understand the excitement of such a reveal, much less the silly notion that Mondas is Earth's twin - just turned upside down. While the Mondasian Cybermen will no doubt mean more to us long term fans, Stephen Moffat manages to show amazing deftness in handling concerning the return of John Simm and Michelle Gomez. The original pitch for this series was that it would be a soft reboot of everything, people could jump into The Pilot without being completely lost. Moffat manages to give the casual viewer enough information to understand who the Master is and why he is important, without ruining the whole thing. The scenes between the Doctor and Bill neatly establish that Missy wasn't always a woman and the Master is given enough time to manipulate Missy for casual viewers to work out who he is before the massive twist. Of course, some viewers might be a little confused when he mentions being Bill's former prime minister but it is all made clear when he confronts Missy and tells her that he is concerned about his future, but I'll expand on that point in a moment.

For veterans of the show from Russell T. Davies' era, this episode was a refreshing look at how fun John Simm's, Master could actually be. I was never the biggest fan of his Master when he was with David Tennant, he was too crazy and not like the original. But here he has struck a nice balance between the two. Unfortunately, his Joker-style supervillain feels very forced, especially when compared to how Gomez handles her material. But he is better written as it appears that Moffat is a lot more comfortable with the Master than Davies ever was. We never saw much of Simm's Master in a disguise but here, he seems to be having a blast putting on all that makeup and messing around with Bill.

Simm also appears to be much more comfortable in the role this time around which bodes well for his much more straightforward Master performance in the next episode. It is interesting to see him free from the brief of being a dark version of the Tenth Doctor and seeing him instead tangle with the Twelfth Doctor and Missy. And the Master's renewed love of disguises was a nice little call back, which I'm sure many of us saw through straight away! 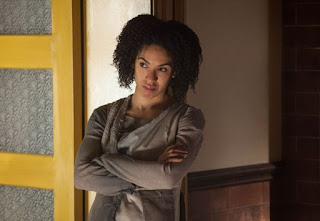 And all this brings us back to the most intriguing narrative decision of this episode, there is an actual reason for the two incarnations of the Master to be present. As he tells Missy, the Master is concerned about his future and his reappearance is a manifestation of Missy's desire to leave her past behind her. One of the good things about Davies' really crazy Master was that this version was the one that was most certainly incapable of redeeming himself from all the evil and death he had caused. The dilemma puts the Master in the same position as the War Doctor in Day of the Doctor. If this is the future before him, can he really bear it?

The Master is right, the Doctor will never be able to forgive Missy for what she did to Bill when she was him. Even though she can't remember it. Why Missy can't remember anything about being the Master at this point of her history is explained that their timelines are converging and messing around with them. But her past incarnation integrated himself with Bill when she was at her most vulnerable, earning her trust over ten years before betraying her in the cruellest of ways, sending her for conversion when rescue in the form of the Doctor, Nardole and Missy was at hand. Bill was right when she said that she was scared of Missy/The Master, he betrayed her in the most heartrending of fashions.

All this forces us to ask the question as to whether the Doctor will ever be able to really trust Missy. He is, after all, now in the presence of a living reminder of her dark past and she is in the presence of the ultimate temptation to return to her old ways. The Doctor exposed Bill to the worst of hardships in his quest to make Missy good and perhaps the worst of it is that so far, he hasn't been proved wrong. He had every reason in the next episode to keep searching for the real glimmer of hope in Missy's soul. This need is so desperate he even shows a real emotion, something Nardole cheekily points out but it is still enough to get Bill converted into a Cyberman and might be more than enough to cost him his life when the series is over...