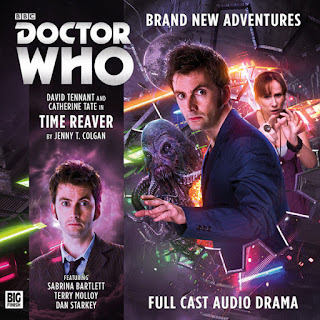 Listening to this adventure, you wouldn't know this was the first story to be written by Jenny T. Colgan, though more have been written and released in a timey wimey way, but of the three new stories to feature David Tennant and Catherine Tate as the Tenth Doctor and Donna, Time Reaver is the one which uses the audio medium the best.

It would have been hard to sell the kind effects that the time reaver would have needed on television, though one thinks they would have done something similar to those seen in The Matrix, just slowing everything down. But instead, the use of scripting and audio treatment does the trick just as well, with some nice work from Colgan, director by Nicholas Briggs and sound design from Howard Carter.

Colgan does spend more time with Donna than the Doctor but that is certainly no bad thing, Colgan clearly has a handle on how their relationship worked and what it was in their relationship that made the pair click. As she does in her novel, In the Blood, Colgan gives us a Donna who has learnt from her time with the Doctor but still has elements of her Chiswick temp going on underneath.

Colgan also gives us a new enemy who is very reminiscent of Sil from Colin Baker's, Vengeance on Varos, in the form of Gully, a giant talking octopus, who is up to some sort of nefarious scheme. Actor, John Banks sounds like he is having a blast as the evil octopus and there are, yet again, some very strong performances from the main cast, particularly as David Tennant knocks his performance out of the park when his Doctor's anger finally explodes...