Doctor Who: The Eternal Battle - Review 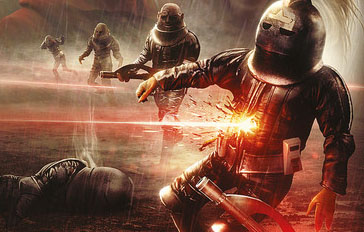 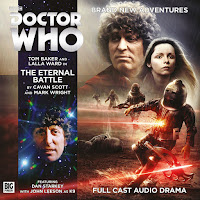 It doesn't take very long into this audio adventure for Romana to comment on how novel a battle-weary Sontaran is. In fact, it could have been that very line which was the starting point for The Eternal Battle. The Fourth Doctor stories from Big Finish are perhaps their biggest attempt to truly capture the feel of the eras in which they are set. When the range was originally announced, it came with the tagline, "Its Saturday Tea-Time in 1977 - All Over Again!" And even today, there remains an undeniable feeling of nostalgia which runs through them.

This isn't a bad thing either, Tom Baker remains the most popular of the classic Doctors, with more of his stories featuring in the top ten of the 2014 Doctor Who Magazine 50 Years poll, than any other Doctor. And that each of these stories comes from each of his television series' allows us to really see the fondness for his performance and the production at the time. I suppose it was more important than ever to recreate an authentic feel for his Doctors era, allowing us to have brand new adventures, instead of only being able to re-watch his television stories over and over again.

But not of all his audio stories have been great hits, stories like The Exxilons and Return to Telos as well as the reintroduction of Geoffrey Beaver's' incarnation of the Master never felt like anything other than continuity for continuity's sake. And because of this, The Eternal Battle really feels like a step in the right direction. Coming from authors, Cavan Scott and Mark Wright, whose contributions to Big Finish stretch back to their earliest days, this is a thoroughly enjoyable tale, where the inclusion of the Sontarans feels like essential to the plot - rather than just being a nice throwback for us fans.

Of every alien race to make an appearance in Doctor Who, none have been better at showing the futility of war except for the Sontarans. Warfare is a means to an end for creatures like the Daleks and the Cybermen, but for the Sontarans, war and death in war is an integral part of them, it is almost their whole identity. The find glory in it. But what happens when you take away the Sontaran's belief in glory in death? That is a question that The Eternal Battle tries to answer. While it doesn't successfully answer it, it adds more dimensions to the race than virtually any other story that they have featured in since their debut.

And when the story is set on a war-torn planet being ravaged by the living dead, you would think that humour would be in severely short supply. And to their credit, Scott and Wright understand that lighter moments are necessary to make darker moments more impactful. And they seem to understand that slapstick and wit have a place in the show, as a result, we get the Doctor jumping up and down to test the gravity and Sontarans saying that the word 'pacifism', is a swear word. Both elements fit nicely into the story.

But the majority of the humour in this story comes from John Leeson voicing K9. While the robot dog might have presented some real problems behind the scenes for the production crew, he is a real god-send here. Because he is the one character who constantly comments on the events unravelling around them, he can provide humorous interjections and clarity to the action in fight sequences. And when he does both with wonderful lines like, "please put this unit back down on a vertical axis", we are reminded how wonderful John Leeson is!

And that isn't to say that the other regulars aren't on brilliant form either, Baker will always sound right at home in the role of the Doctor, easily making the listener forget that four decades have nearly passed since his initial run on television stories. As for Lalla Ward as Romana, her scenes opposite Dan Starkey as Field Major Lenk are some of her best scenes ever done for Big Finish. The word toughness isn't one we would attribute to Romana, at least not at this point in her character's story. But here, she displays the kind of fortitude that accompanied her character in the Gallifrey series. And it this kind of connection to different eras which allows The Eternal Battle to embody the best of Big Finish's take on Doctor Who...