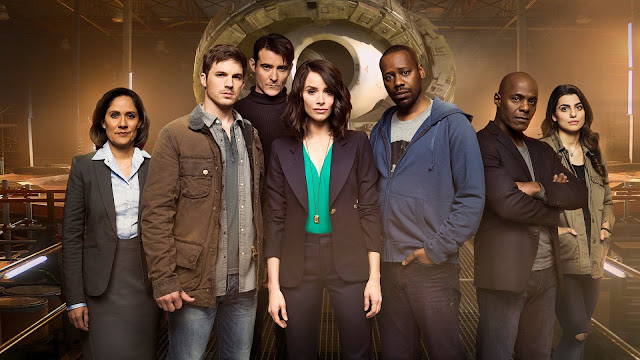 Picking up moments from the end of the previous episode with Rufus having been shot by Al Capone, the team must take the Lifeboat to 1954 during the height of the McCarthy era.

This episode sees Jiya tag along, but it doesn't take long to see that having four passengers in the ship instead of three has adverse effects on her and not long after arriving in 1954, she falls into a coma. It was unfortunate because it sees Rufus getting side-lined letting Lucy and Wyatt to get all the fun. Still, I suppose that bringing Jiya along for the ride gives Rufus a little something to do while his friends try to stop Flynn from murdering all of Rittenhouse.

In order to achieve this, Lucy has to find a chink in Rittenhouse's armour, which comes in the form of her grandfather who she finds out, rather amusingly, is gay. She uses this and his conscience to help them defeat Rittenhouse, rather than killing them all. It was pleasing to see that her grandfather was willing to go along with that given that he believes all of Rittenhouse to be horrific.

Back in 2017, we learn that Connor Mason isn't the weak willed Rittenhouse servant we all believed him to be but someone who has been playing the long game, waiting till he has gathered enough information to put all of them in prison for several lifetimes. Agent Christopher has no choice but to go along with him and it doesn't take long for Lucy's grandfather and Mason's plans to join and give them all the evidence they need.

Managing to make a deal with Flynn, the group return to the present, Lucy and Wyatt look about setting their lives right and plan to take the ship out for one last trip to get Lucy's sister back. Unfortunately for Flynn, the government don't keep their side of the bargain and arrest him when they arrive, meaning he will still have to do jail time.

Before she goes and gets her sister back, Lucy visits her sister and it is at this point that I thought it was all going to end nicely. But it is here that the writers give one final twist in the tail.

Lucy's mother is Rittenhouse, she has been all along. After Lucy reveals her plan to her, her mother tells her that Rittenhouse would never allow Lucy to go back in time given that her mother was seriously ill when her sister was alive.

This episode worked fantastically as a series finale and if we get a second season, a season finale. I did enjoy the twist, but when thinking back on it, I felt a little cheated because the writers kept that for the final moments of the show and as it is highly unlikely we will get a second season, it is a cliff-hanger which will unfairly leave us wanting more...