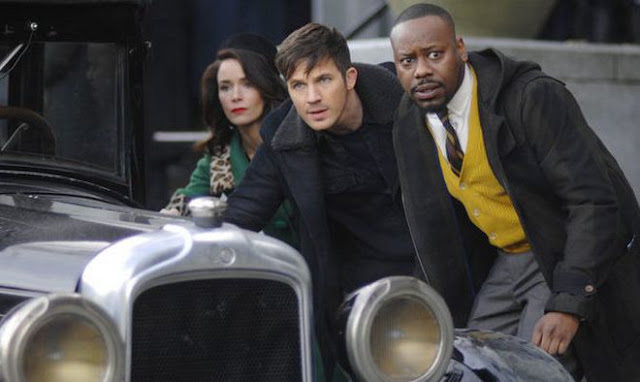 Rufus and Lucy have to head back to Rittenhouse infested Connor Industries to travel back in time to 1931 Chicago to once again track down Flynn, who this time, has forged an alliance with Al Capone. They find themselves having to enlist the help of Elliot Ness to bring the man to justice...

This episode finally sees the team going rogue as 1931 wasn't their original destination. Upon their arrival, they quickly learn that Capone has been acquitted of his tax evasion charges, thanks to information given to him by Flynn.

But then history goes to pot when Ness is shot dead in a raid by Capone's men. With Ness dead, they have to find Capone's brother, who has been hiding in plain sight under a fake identity.

Meanwhile, back in our time, Connor Mason is livid at Rufus for spreading a computer virus across all their technology. Mason actually goes as far as to lock Jiya up because he knows that she would naturally side with her boyfriend. Unfortunately, his plans to hack back into his own computer system is met with failure after failure thanks to Jiya pulling a MacGyver and putting together a computer made out of spare parts that conveniently happen to be in the store room she is locked up in.

This was overall a pretty fun little episode, with plenty of twists and turns thrown in for good measure. We finally learn a little more about what exactly Rittenhouse is and are treated to some nice character beats when Wyatt talks about his army academy days.

The main problem with this episode was that they killed Ness off so quickly. It just seemed like such of a waste to have someone like Misha Collins in the role if he is going to be killed off. Misha does a brilliant job as Castiel in Supernatural, he shouldn't have been given this role only to be killed off after five minutes of screen time.

But on the other hand, the episode really leaves you in the seat of your pants as we get left with one big question. Just how the hell will the team get out of 1931 now that Rufus has been shot and his life really does hang in the balance? I am looking forward to finding out in the finale...