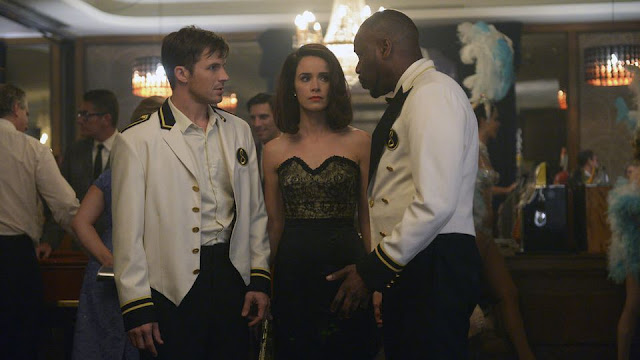 Following Flynn to 1962 Las Vegas, the group, Lucy, Wyatt and Rufus meet up with the most infamous mistress of that era. While in the neon-lit night of Vegas, Rufus meets his old mentor, Anthony Bruhl, who has motives a lot darker than anyone could have ever imagined...

During the 1960s, Las Vegas was known as Atomic City, due to the number of nuclear weapons which were tested in the area, with little to no concern about the possible radiation fallout because no one knew such thing existed. But the gang aren't concerned with the glitz, glamour and gambling surrounding Vegas, they are after an Ingrid Pitt, who turns out not to be a person, but a clue, a slang term used for the core of a nuclear weapon.

The team initially expect Flynn to try and kill J. F. Kennedy, a year early. And while their attention is focused on trying to protect him, Flynn puts his plans into operation by using the world's most notorious mistress, Judith Campbell, to get him the keys to the nuclear weapons hidden in the desert.

This episode sees another culture shock for Rufus, when he makes note how invisible black people were in the 1960s. But he is really the focus of this episode as he has a chance encounter with his old mentor, Anthony Bruhl, and he learns that Bruhl may not be as innocent as he had once believed. But lovable Rufus refuses to believe this and is adamant that Flynn is trying to use Bruhl as leverage, forcing him to comply with his wishes.

And for once the team manage to keep history on the right tracks. Yay! But what they did do fail to succeed in their mission, which leads them back to present day where boss, Connor Mason orders the technicians to hunt down Flynn's time-machine in the present day.

This was a another solid episode. After a bit of a shaky pilot episode, I am glad that the quality has picked up significantly. I really enjoyed seeing the Vegas setting and the costume designers must be praised, over the past three episodes, their work has been top-notch. Well done! I hope this kind of quality keeps up.

What I also liked was seeing a more sensitive side to Wyatt, played by Matt Lanter, who up to this point, has been used as little more than the muscle for the team. It was a good idea for him to use the old Back To The Future trick and send a telegram to the future but sadly, it didn't effect the death of his wife, who was still dead when he came back. Plus more of Matt Lanter is gladly appreciated!

But what I still think is a problem is Lucy's struggle with her personal life. After stopping the Hindenburg from crashing in the way it did, her father never met her mother. But this is the weak point of the series and has been dragging on over the past three episodes with no sign of progression. And while anyone in their right mind wouldn't complain if someone as handsome as her new fiancé was kissing them, this part of the storyline is starting to get quite boring. I think it is time they started to focus on how the time-travelling could be effecting other members of the main casts' lives...
Abigail Spencer Historical History Malcolm Barrett Matt Lanter NBC Science Fiction Television Timeless