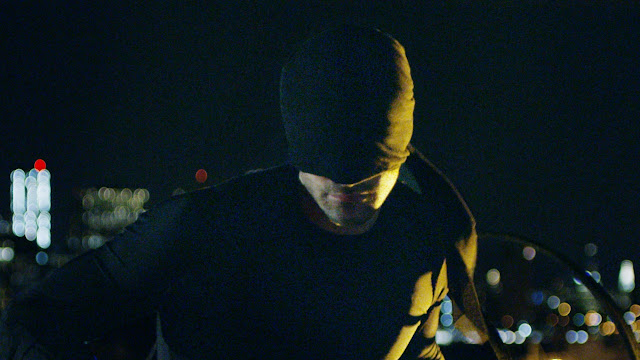 While his comics are brilliant, Daredevil hasn't had the best of luck when it comes to making the jump from the page to screen. He first appeared in The Trial of The Incredible Hulk, the terrible TV movie sequel to the Incredible Hulk series featuring Bill Bixby and Lou Ferringo. This was meant to work as a kind of backdoor pilot for a spinoff series. But due to the TV movie being so terrible, it never happened. His next live action appearance was in the 2003 movie featuring Ben Affleck and Jennifer Garner, both of whom were massively miscast. That's the appearance of Daredevil which everyone has heard of. And that movie wasn't very good. But everything that movie got wrong, this Netflix original series gets right. This is the live action appearance of Daredevil we have been waiting for!

And from the outset it is clear that it is going to be very different from Marvel's usual output. Rather than being set in the Avengers part of New York, the action shifts to the less sunny, more gritty corner of the Marvel Universe, Hell's Kitchen. This is exactly the place that young women would be getting abducted and sold as sex slaves while being beaten with cattle prods if they don't shut up and except their fate. This is exactly the kind of cold opening that this type of show needs and already, we feel miles away from the lands of the Marvel movies and Agents of S.H.I.E.L.D. This is the first time that Marvel has begun to disconnect from the wider universe and stand on its own two feet. But I like how the show doesn't shy away from making subtle references to events in the movies. For example, the only reason that Matt Murdock and Foggy Nelson can afford their offices is because Hell's Kitchen was one of the places worst hit in the attack from Loki.

And what I liked the most about this opening episode is that it didn't try to cram in Daredevil's origin story. We get a little flashback to how Matt was blinded but for now, that appears to be it. We haven't learned how his senses enhancement works and how he learned to fight. We haven't even learned why he decided to become a masked vigilante. This is probably because the writers knew we would be watching this series in large enough chunks to spread the story out. And that really helps the tale to develop.

Charlie Cox is just brilliant as Matt Murdock, lawyer by day, vigilante by night. From the off, the show asks us to question if Matt has become Daredevil just to bet baddies and crooks to a bloody pulp to save his city or if, when he confesses to his local priest, it is because he has the devil inside of him which is screaming to be let out. In modern times it is rare to see a superhero who is still as religious as Matt Murdock, a devoted Catholic. You certainly don't see characters like James Bond worrying about if taking a life will affect his soul. And I guess it is that makes Matt such an attractive character in terms of storytelling. There is a lot of drama which can be syphoned from that. And Cox does a brilliant job of showing us Matt's conflicted nature.

It helps that Cox has a great rapport with his co-stars, Elden Henson as Foggy Nelson and Deborah Ann Woll as Karen Page. To be honest, I am surprised at just how quickly I came to love Foggy and Karen. The pair of them aren't that brilliant in the comics. A part of me was worried that Karen would up as the damsel in distress, always in need of Daredevil's help. Indeed, during the prison scene I was sure that Matt would appear from nowhere and save Karen from being killed and so I was relieved when she turned the tables and saved herself in a way that felt perfectly realistic, if a little gross. So I guess it was too bad that she returned to her apartment despite everyone's warnings and nearly got herself killed. As I watch the rest of the season, I do hope this is a one off incident and it doesn't do what Arrow and The Flash have sadly done with Laurel Lance and Iris West.

Despite this being a strong opening episode, there was one character who was notable in their absence. But the decision to hold off and not try to cram everything in, in one go, was the right one. That was after all, the mistake the movie made, giving us his relationship with Elektra and his feuds with Kingpin and Bullseye in the space of a couple of hours was the reason the film was so messy and uneven.

If there is one thing that this series has in common with the movies which spawned it and Agents of S.H.I.E.L.D., it is the choreography. As this series was on Netflix and not network television, the fights can be bloodier and a lot more brutal than the ones on Agents can be. You really feel every punch and broken bone. (And in some cases, see the broken bones too!). So this series isn't for the squeamish. Something else I liked was how, Matt wasn't given the name Daredevil in this opening episode and he isn't some unstoppable fighting machine. He may have advanced senses, shown through sound-effects rather than visual effects, but he is still human. When he gets hit, he really feels it. And he is allowed to look exhausted during the fight, not just after it. And he wakes up in the morning, after a long night of beating up human traffickers with aches and bumps and lumps. His extremely well toned body a mass of cuts and bruises.

This is also the first live action Daredevil to be filmed in New York rather than Vancouver or Los Angeles. More than any other character, Daredevil is New Yorker. Hell's Kitchen is such an important part of his story, that it is practically a character in its own right. Modern day Hell's Kitchen feels a lot different to the time when Frank Miller was writing it. And that is where the show excels. The writers have stated that the invasion of New York by Loki caused a lot of the neighbourhoods to be reverted to an earlier time when crime ruled them. I like Owlsley's remark that heroes are actually good for business because of the property damage they cause, which keeps their dodgy construction companies in business...