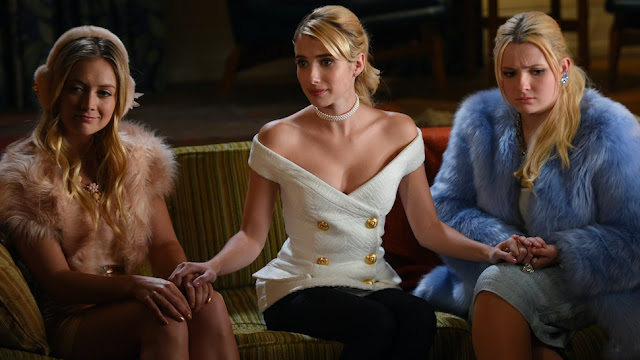 Poor Chanel #5. After all her boyfriends ended up dead in season 1, she apparently still can't catch a break as her new boyfriend, Tyler was brutally murdered in the last episode by the new monster. But he isn't the only one, except this person is undead and has the form of a certain Twilight werewolf, stalking the halls of the hospital. But while he may worry about if he is dead or alive, with a body temperature of 67 degrees, he won't have to worry about the cold from overdone air conditioning that hospitals are notorious for!

Putting aside the smoking body of Tyler for a moment, there are actually people being cured at the CURE hospital. The only problem is that no one has been able to set foot outside without being murdered. If they were to die from their diseases it would be hard enough to fill out a death certificate but trying to explain away how they were murdered? You've just got over whatever strange illness you had, only to be cut to shreds by some green masked monster! So pleased are you by the treatment that you are going to recommend the hospital to the newspapers only for your head to end up as the main form of entertainment on a candy cart. The decapitation count has risen since the hydrotherapy incident...

Dean Munsch is obviously fanatical about covering the deaths because she is desperate to find a cure to her own problem. And it is convenient that this hospital comes with a bubbling green swamp to hide the bodies in. And while she isn't dying just yet, the speed which she races the burnt Tyler to the swamp is really epic. For someone dying of an illness contracted by eating brains, (because she didn't know the people she was partying with were cannibals), she can certainly sprint fast with a gurney.

But the green meanie isn't the only problem facing Munsch and the Chanels. Hester is still proving to be an issue. Should they finally give into her and her demands for discontinued beauty products and the move, Room with a View. She settles for the movie and sends the group to a mansion in Florida which is hiding a elusive face cream and its creator a nurse who obviously is keeping secrets. But these secrets are so serious that the hospital had previously paid him five million to keep her mouth shut. With that much money in his bank account his face freezes without the aid of Botox when he is asked all sorts of questions, to which, of course, he has the answers too.

The investigations are almost as dead as the bodies rotting at the bottom of the swamp. This is what makes you begin to re-examine the people you've classified as innocent before. Doctor Holt , or his transplanted hand, isn't under my suspicion, at least, for yet. I'm sure you can't just let go of a deranged hand of a serial killer very easily, even if it did end up with the self-proclaimed handsomest and highest paid doctor and highest sperm donor in existence! For these reasons, I'm not too sure he should be struck off the list of suspects too early. He certainly has a sinister machismo that I don't trust. And following the shock death of Chad Radwell, I'm sure he is going to be the main suspect.

And where is Nurse Awful? Has Ingrid Hoffle been indisposed because whatever illness she has makes her pop pills like they were tic-tacs? Or is she taking time off to scrub herself into a slimy shade of green? Hester says that unmasking the green monster is going to be easy. For now, we can only keep on following the trail of green slime until even more discontinued beauty products can get more out of her!