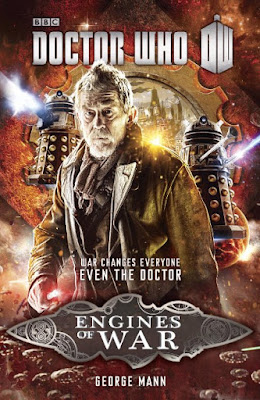 Following on from the 50th Anniversary story, Day of the Doctor, I thought that John Hurt's War Doctor was going to be largely forgotten, like Peter Cushing, despite the fact that his character was possibly one of the best things to come out of the 50th Anniversary tale. He was the incarnation who forgot his principles and took up arms against the Daleks and it was inevitable that people would be wanting more from him.

Before Day, we had only seen glimpses of the Time War which was probably a good thing as it would be too ambitious to portray on screen properly. This left us with only the audio, which Big Finish took up and print formats to demonstrate the war. And George Mann's, Engines of War, does just that.

We begin the adventure with the plucky character called Cinder. She is a human survivor who is trying to live a desperate life as a member of a small group of human resistors on her home world of Moldox. Moldox is one of the worlds which surrounds the phenomenon Tantalus Eye which is a temporal anomaly at the heart of a spiral system which predates even Time Lord society.

After narrowly escaping a battle with Daleks Stealth Ships, the Doctor's TARDIS crashes onto the surface of Moldox, narrowly avoiding killing Cinder, not the best way to meet your next companion. The Doctor is forced into an uneasy alliance with Cinder and they investigate a new form of Dalek. It transpires that the Daleks have been experimenting on themselves, inspired by the way the Time Lords had tried to tamper with the Daleks' DNA. The 'Skaro Degradations', include Dalek spiders, suspended human torsos and a new design for the weapons Dalek who is given the ability to remove its target from time itself...

George Mann, who come to this book fresh from his Krynoid tale in the Tales of Trenzalore book, creates a fairly restrained tale but with a whole incarnation of the Doctor we know little about, it is odd that he chose to focus on the latter moments of the War Doctor's life.

The War Doctor evidently stands in the middle of the conflict as he is used as an agent by his own people despite having no military rank. And he constantly butts heads with the Time Lord hierarchy who is led by Timothy Dalton's incarnation of the Gallifreyian president, Rassilon, who we last saw in The End of Time. Mann captures Rassilon perfectly, he is a man driven to unspeakable extremes to try and save his people from extinction at the hands of the Daleks.

The rougher version of the Doctor remains principled throughout the book. He is sharp and sardonic though not necessarily violent and through the eyes of his companion Cinder, we catch glimpses of the Doctor we know and love underneath the gruff exterior. But it is also made entirely clear that this is a different incarnation to the one who once asked if he had the right to wipe the Daleks out at their creation. The difference is made entirely clear when he tells Cinder if he had the chance to do it all again, he would go through it and learnt to live with the consequences.

Mann also makes references to past Doctor Who adventures, taking us from the High Council Chamber on Gallifrey to the Death Zone, last seen in The Five Doctors. And to his credit, Mann doesn't go overboard on the continuity and references, showing restraint he only uses elements that help to drive the story forward to its conclusion.

Engines of War provides a cracking adventure with high stakes and deposits our main character right into the place he needs to be for the 50th Anniversary tale. And while he may have cried, "No More" at the end of this book, it sure as hell wasn't the last we heard from him. John Hurt's War Doctor quickly moved to audio for Big Finish but I do hope this isn't the last we have seen from him on the printed page...