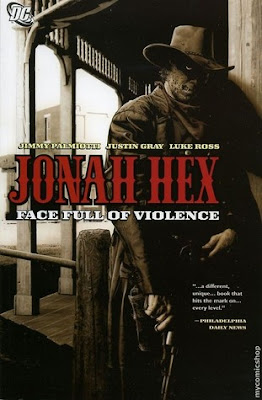 I didn't know until I looked into it, that Face Full of Violence, was the first collected volume of the, then modern, run of Jonah Hex comics from 2008. So looking at in 2016, Hex really got off to a bang, with a distraught father trying to find his son who has been kidnapped. He has tried the sheriff and even the Pinkerton Agency but no one is willing to help him. He turns to Jonah for help.

Jonah Hex, was a character first introduced to the DC Comic universe in the 1970s but is one of those characters who will likely never have heard off. However, he has appeared in his own 2010 movie and more recently in an episode of Legends of Tomorrow. He is a great story with his own tragic backstory but he is made more recognisable by his horribly scarred face.

Set during the Wild West, the story really do have a feel of those spaghetti western tales on television and at times, his character has a passing resemblance to Clint Eastwood. And like the nameless man who rides into town and comes face to face with trouble in those movies, Hex will often find himself in really deep water. What he often considers to be an easy job turns out to be a lot more complicated and his survival instincts kick in which will lead to fatal consequences for those forces opposing him.

Hex is known through the Wild West because of his reputation to be violent but he is also known to be someone who will always do good in the end because of his own personal code of honour. While he might be disturbing to look at, he is reliable, dangerous and brilliant at his job. Through years of tracking down killers, thieves and generally righting wrongs but he has a hell of a lot of enemies who, every so often will crawl out of the woodwork to try and make his life as difficult as possible.

What makes him even more dangerous is that Hex is a man who has nothing to lose, which makes him immune to blackmail and danger. But he is ultimately human and does falter, often falling for the wrong people before he realises his mistakes. And at that point, it is advisable to stand back as criminals will quickly learn not to cross Jonah Hex.

Authors, Justin Gray and Jimmy Palmiotti do a great job of spinning some interesting Wild West yarns. Personally, the Wild West isn't a period of history that interests me but the pair manage to keep the Jonah Hex books interesting, probably through their excellent treatment of the main character. The main artist for this book is Luke Ross with one issue illustrated by Tony Dezuniga. Ross does a particularly good job of getting across the gritty world that the Wild West was and his art is easy to follow unlike Dezuniga's who I had a little trouble following because it was so erratic. And is it just my imagination or does Hex look quite handsome in some of those panels?

Maybe there is something in cowboys after all...