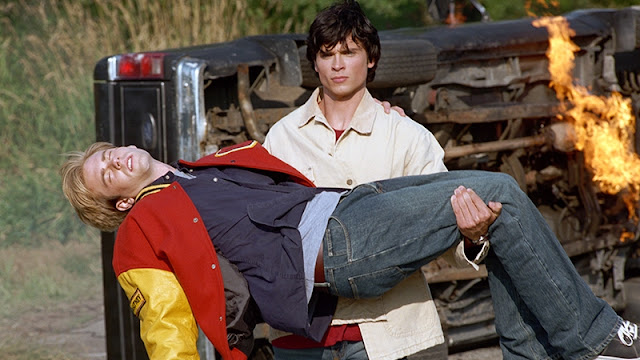 Following on from the brilliant pilot which promised a fantastic re-telling of the classic Superman tale, Metamorphosis is a real let down. A creepy boy, who is infatuated with Lana Lang and collects bugs is in a car accident which sees all his insects set free. But that isn't before all the bugs and creepy crawlies have a quick nip at him. As they come from Smallville all the bugs have been altered slightly by the kryptonite in the soil. They turn him into some sort of bug boy.

It is the bug boy who is perhaps the only thing which works in this episode. He is genuinely disgusting and revolting and the 'meteor freak' as Chloe dubs anyone like him, works well as a plot device. He also gives Clark his first villain to fight and the fact that it is in his hometown makes it all the worse for him. The fact that the villain has disturbing powers help to make Clark's seem normal which is nice.

And the fact that the boy has been infected with Kryptonite infested bugs makes him a interesting first villain for Clark to face as he can't get within ten feet of him. It gives us some insight into the way Kryptonite works and our first mention that lead can stop its effects on Clark. It gives this episode a much needed dramatic challenge as it would be dull for Clark to easily defeat every baddie.

Knowing how their relationship would be developed in later seasons, this episode sees the first meeting between Lex and Lana. Lex in these early seasons really tried to be a good friend to Clark and even tries to get Lana to be interested in Clark. At this point, actress Kristen Kruek hadn't really done a lot and she doesn't come across too well in this episode. I largely attribute this to the poor material she was given but at this stage in her acting career she only ever had two expressions, smiling or frowning. I'm sorry but its true. It does come across as a little baffling as to why she holds so much interest for Clark.

There are a couple of good scenes in this story, Lana opening a box of butterflies. I personally wouldn't appreciate that but there we go and Clark hovering above his bed is quite amusing and is the first reference to his ability to fly.

And the theme tune is brilliant. It surely has to go down as one of the most iconic tunes of my generation. I'll admit it, I still get slight chills when I hear it!

With the exception of a few good scenes, the good acting from bug-boy and the brilliant theme tune, this episode falls completely flat next to the pilot. It feels like the writers somehow lost the ability to write between the making of this episode and pilot. The finished product is dull and boring and not Smallville's finest hour...