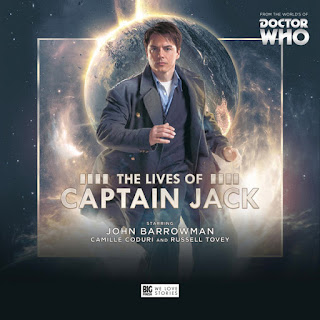 Coming in June 2017 from Big Finish is The Lives of Captain Jack, a four-disc box set collecting together four brand new stories about everyone's favourite Time Agent hero, played by John Barrowman. John is joined by some familiar faces, including Camille Codouri as Jackie Tyler, and Russell Tovey as Alonso Frame, as well as Alexander Vlahos

1. The Year After I Died by Guy Adams

Set in the year 200,101, on an Earth ravaged by the Daleks, Jack struggles to save humanity from its oldest enemy.

2. Wednesdays For Beginners by James Goss

Jack and Jackie Tyler must unite to rescue the Powell Estate from a force whose name Jackie can never say.

3. One Enchanted Evening by James Goss

Captain Jack and Alonso Frame have only just met. But why did the Doctor want them to be together?

He’s the young star of the Time Agency, and his whole life is about to fall apart. But that’s not going to stop him winning.

Producer and writer James Goss gives an idea what's coming: "The Lives Of Captain Jack features just four adventures from his incredibly long existence. It takes us from the year 200,101; to the Powell Estate; to the Time Agency and to an enchanted evening with Jack and Alonso Frame. John was an utter delight throughout, and the day with him and Camille may have been one of the happiest in my life."

The Lives of Captain Jack will be released in June 2017, and is available on pre-order from today at £20 on Download and £25 on CD (which will unlock a free download version on release). This exclusive Big Finish pre-release price is being held until the set's general release at the end of August.