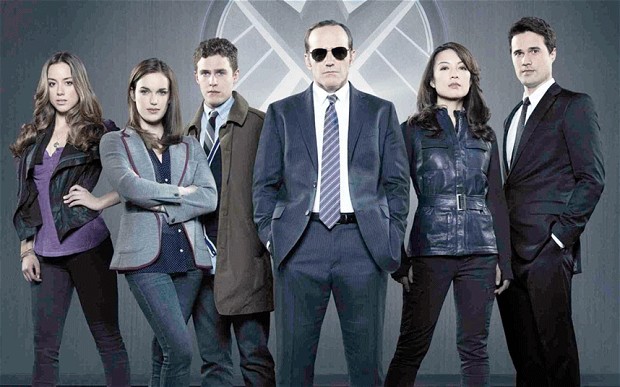 Marvel's Agents of S.H.I.E.L.D. goes the classic way of introducing us to a new team, introducing us to each member the eyes of a new comer. The show begins with us following a mission for operative Grant Ward, whose badass moves get the attention of Maria Hill. I was pleased to see that actress Cobie Smulders who played Hill in the Avengers movie. Oh, and he gets to meet a mysterious man called Phil Coulson, last seen dying after Loki kills him during the battle of New York in the movie Avengers Assemble.

Coulson is putting together a team of agents to investigate the dangerous world of superheroes and villains and Ward is to be his latest recruit. He has also brought on board scientists, Leo Fitz and Jemma Simmons, played by Ian Caestecker and Elizabeth Henstridge and veteran agent Melinda May played by Ming Na-Weng. The team's first objective is to investigate a newly emerged superhuman played by J August Richards who saves a woman from a burning building and Coulson warns them that there are other nefarious organisations also out to get him.

I have to admit that this show had me, mere moments into the first episode, with Ward kicking some serious but! Yes the whole spy sequence escalates into violence but it is also extremely funny that makes the fight watchable.

What was good to see was that thanks to the many different characters involved in the show, it enabled it to take the first season off into many different directions. A lot of characters aren't who they first appear to be, some are broken or damaged and some are just so excited to be there that they cause a certain amount of friction to begin with. Right away, there is something that we don't know about May, she knows what happened in a round about way to Coulson after Loki killed him but is keeping it secret, immediately that sets up some groundwork for future episodes.

If you are new to Agents, don't expect Marvel characters to pop out of the woodwork. This is a series about a human group of Avengers who, lets face it, have probably stopped more world threats than the actual Avengers themselves. The team are joined by hacker Skye whose fascination and adoration of the superhuman world puts her on S.H.I.E.L.D's radar. Certainly, there are characters who could be tied in someway to the bigger Marvel universe and with nice nods to characters like Agent Romanoff, a hint at Black Widow, there is enough here to keep any continuity obsessed comic book fan interested!

I was glad to see that Clark Gregg was still playing the same lovable Coulson that appeared in the Marvel movies, he brings a light touch to every scene he is in without taking away from the tension in those scenes he is in. He is a joy to watch. Also excellent here is Ming Na-Weng who really gets across just how world weary but formidable Melinda May is. Elizabeth Henstridge and Ian De Caestecker are hilarious as Fitz and Simmons, instantly acting like an excitable but bickering married couple who clearly have feelings for each other. Brett Dalton is fantastic as Ward, and he is quite handsome too which doesn't hurt! And Chloe Bennett manages to pull of Skye, a character who come off as quite annoying, with just the right amount of humour but knows when to be serious. And the whole gang work really well together!

Creator and pilot co-writer Joss Whedon's cleverness runs through this series and, with the exception of a few moments where the humour didn't quite work, gives us a crowd pleasing pilot episode. Kicking things off in style and setting up plot threads that will no doubt be pulled in the future, the pilot episode of Agents of S.H.I.E.L.D. is a triumph.