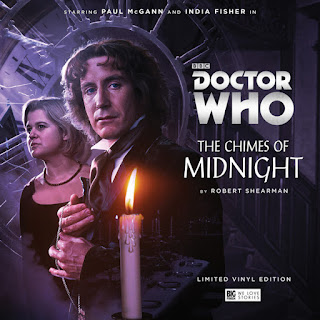 Originally released in February 2002, Robert Shearman's Doctor Who: The Chimes of Midnight went on to become one of Big Finish's most popular stories, claiming the number one position in 2015's Top 20 Poll. Starring Paul McGann as the Eighth Doctor and India Fisher as Charlotte Pollard, this gripping adventure finds the travellers trapped in a Christmas Eve murder mystery, in a house where nothing is as it seems.

Marc Platt's Doctor Who: Spare Parts found the Fifth Doctor (Peter Davison) and Nyssa (Sarah Sutton) arriving on a frozen planet Mondas, where the Doctor's future enemies the Cybermen (Nicholas Briggs) are about to be unleashed for the first time. Taking second place in our Top 20 poll, this adventure also inspired the 2006 TV episodes Rise of the Cybermen/The Age of Steel.

Available to pre-order today for the pre-order price of £79 each (rising to £89 upon release), both limited edition sets contain four heavy 180g vinyl discs enclosed in deluxe premium packaging, alongside brand new special features exclusive to these releases. The cases features four-way gatefold sleeves, rigid slipcases and specially designed covers by artist Tom Webster. Download copies of both stories are also included with the order.

Both sets are strictly limited to 500 copies each – so order yours today!

Both stories are still available to order as downloads for just £2.99 each, alongside 48 other stories from the early years of the Doctor Who Main Range.