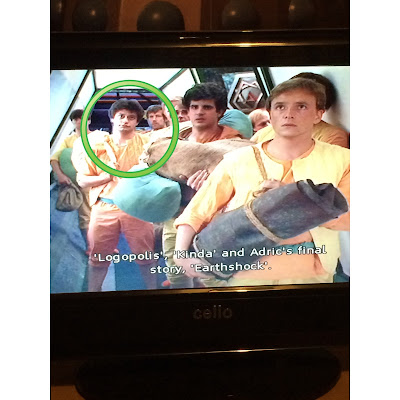 In the final part of Full Circle the passengers of the Starliner hear the dreaded news that Marshmen have broken in and are running amok around their ship. The acting cue must have been to look scared, ignore the folds that appear in their rubber costumes when the monsters appear and pretend to be absolutely terrified. Remember, these are the monsters that you have nightmares about. Mistfall is here. Every other actor on screen here is doing there best to at least look nervous when they hear the news over the speakers.
"Oh my Christ, the Marshmen!"
"Oh No!"
"Mummy!"
And you imagine other passengers descending into floods of uncontrollable tears, and melt into a sad little puddle on the floor
All except the highlighted man who, couldn't look more relaxed if he tried. We all understand that extras have to make themselves shine if they want to get noticed but this man just steals the screen and the viewers attention and distracts us from what should be a tense moment in the script. I apologise if this man is someone frightfully important to the extra world and moved to Hollywood to star in such roles as 'Chilled out Man on train' in Avengers: Age of Ultron, 'Fifty First Man at Party' in Kingsman and 'Fifth Peeping Tom' in Fifty Shades. Standing with his legs wide apart and his few personal belongings stuffed in a flimsy looking bag, slung carelessly over his shoulder he might be trying to act calm but makes us wonder what he has in his bag and if he should offer it around. Maybe they wouldn't be so frightened of this rubber suited monsters if they were as fresh as paint? Unfortunately he looks more likely to turn around and say, "Marshmen? Oh don't worry, they'll only kill you once. Hey, anyone for Sushi?"
Maybe he was trying to melt into the background but he upstaged everyone instead.
I do wonder what this man did next, making more movie magic, a backing dancer for JLO or if he was destined to be one of those stars who shine brightly but O so ever briefly.
1980 Doctor Who Television The Fourth Doctor Tom Baker