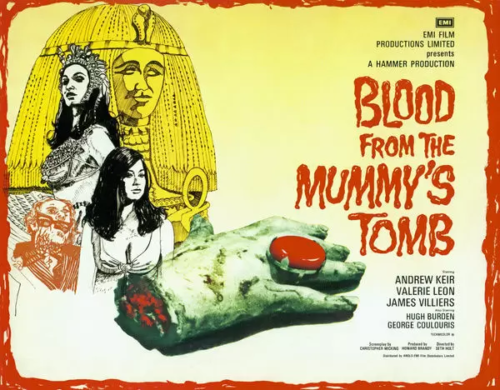 Hammer never had much like with their Mummy franchise, it didn't seem to take off quite like their Dracula and Frankenstein movies. To my knowledge, I've seen all of Hammer's Mummy movie offers, and 1971's Blood from the Mummy's Tomb is, at least to me, the best. I think its because it gets rid of a number of trappings and tropes from those films, gone is the unconvincing and lumbering Mummy, and in steps someone or something completely new, an Egyptian Queen in a state of deep suspended animation, awaiting her rebirth.

Of course, this film isn't entirely without its Mummy tropes, the opening minutes take place in Ancient Egypt with the, (death?) of the Queen Tera. Tera terrorised all those who surrounded her and the priests have taken it upon themselves to remove Tera from history. But when their evil deeds are done, they don't bank on Tera unleashing a curse on them. Then she sleeps for thousands of years, before Professor Julian Fuchs and his team of archaeologists unearth Tera's tomb. And they unearth her curse. At the same moment, Fuchs finds Tera's body, his wife dies in childbirth and that child grows up to be the spitting image of the ancient Egyptian Queen.

That image takes form in Valerie Leon as Margaret Fuchs/Tera, another in the long line of statuesque and buxom leading ladies Hammer offered up. Actually that's not a particularly fair description because Leon, who was a familiar face to fans of the Carry On films, puts in a terrific performance. She does a great job of showing us a woman who is gradually falling under the spell of an unseen force and slowly realising her place in an ancient curse. She proves to be as deadly as she is beautiful and there is no shortage of imposing shots of Margaret and Tera which befits an Egyptian Queen. 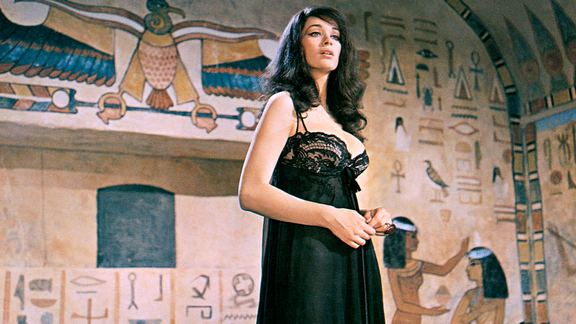 As members of the old archaeological dig start to drop like flies in mysterious ways,  Julian Fuchs, played by Professor Quatermass himself, Andrew Kier, finds himself having to pit himself against the evil desire of Corbeck, a man who has a fascination with seeing Tera reborn and who will go to any extreme to see that come to fruition. Corbeck, played by James Villiers doesn't really feel as a good of a villain as he should be, and no doubt had he been portrayed by someone like Christopher Lee, he would have had a more villainous feel to him.

Based on Bram Stoker's short story, The Jewel of the Seven Stars, to my knowledge the film sticks fairly close to the original story. In no way as famous as his novel Dracula, the short story had been adapted in many different ways long before Blood came along and has been since. And as much as I really enjoy this film, I'm not blind to his faults, the biggest of which is that it never quite lives up to its own ambition. This is most possibly because it was a troubled production, which seemed cursed from the start. Julian Fuchs was originally to be played by the legendary Peter Cushing, however, following one day of filming, Cushing had to come out of the movie because his wife had fallen seriously ill and she would sadly pass away a little later. Indeed, there are pictures of Valerie Leon and Cushing playing father and daughter and I do buy into them being related more than do from the performance from Kier. However Andrew Kier does a decent job nonetheless.

Another problem was that, with much of the film filmed, the director, Seth Holt, suffered a heart attack on set and died in the arms of cast member Aubrey Morris,  five weeks into the six week production schedule, with Michael Carreras having to step in. There is indeed a disjointed feel towards the end, with asylum scenes feeling like something more out of a Frankenstein movie than something set in the 1970s. Then there is the death of Margaret's boyfriend, Todd, which feels like a bizarre sequence of freeze frames, mixed with footage. Carreras has gone on record saying that not a lot of the ending, in particular Todd's death, mixed well with the footage he recorded. It seems even the production wasn't entirely clear of Tera's curse. But the final result is something enjoyable, even if Hammer wasn't knocking people's socks off anymore. 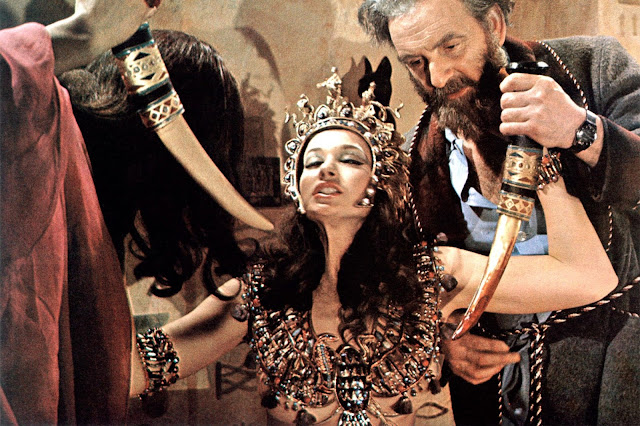 What Blood does do fantastically though is build on a sense of growing tension that makes the whole thing feel wholly unsettling. From the creepy use of Ancient Egyptian iconography to the pitch perfect performance from Valerie Leon, who mixes the trademarks of horror and sex wonderfully, while bringing a genuine sense of emotion to the proceedings. That couldn't have been easy with things as they were on set.

Blood From the Mummy's Tomb remains entirely enjoyable, even with its age and is easily, as I said above, Hammer's best Mummy film. Taking tropes and turning them into something completely new can't be easy but here it is done with competent ease. And it is can easily stand up to and be much more enjoyable that the big blockbuster Mummy films we have nowadays. And to do that, a little film company like Hammer should still be very proud. I'll come back to Blood time and again, almost as if I myself am cursed...