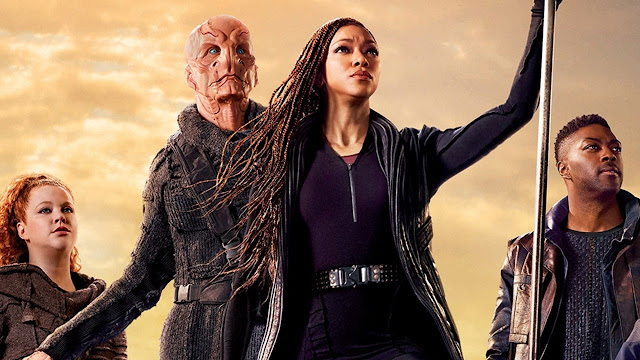 As someone who likes his television programmes to get going from the off and not spend ages assembling all the different characters and plot points first, the opening episode for Star Trek Discovery's third season does exactly what I wanted, throws you into the action and doesn't hold up. However, there was something about it that I didn't think was as strong as the previous season openers we've had so far.
For those who have forgotten, you'd be forgiven because its been a long, long time since we had any news or trailers concerning the new series, this is all about Michael Burnham and how she is the central character. This episode certainly goes to great lengths to remind us of that. As a result, the script takes the two things the producers care about most in concern with this series, Michael and the Starfleet rules and ideals and goes to town with them.
At the end of Season 2, the crew of the Discovery found themselves travelling into the future to save the past, and this is the furthest the series, since it began with Kirk in the 60s have ever been into the future. In many ways, it makes perfect sense that Discovery should have taken place here all along, especially when you think logistically about how it could have effected all the other entries into the franchise. But this future is about as far from Gene Roddenberry's original ideologies as you could possibly get. The Federation is seemingly dead and gone and lawlessness rules across the galaxy. And the direction from Olatunde Osunsamni is very different from anything we've ever had before.
Getting the stark difference from this series and the two that came previously is perhaps the best way to really sell this series to a new generation as it sheds the look and feel of the series' that proceeded it. And while Discovery, at least for me, has always stood on its own feet, for many fans, its never worked as a prequel series. The only problem now is seeing how they'll differenciate this new dystopian universe from other franchises that have done something similar in the past and so far, although this is only the first episode, it feels much like many other dystopian futures we've seen.
But the look and feel of a television series can't make it great on its own, much of a television series is based on the characters involved. And aside from Michael who continues to written very well, we're introduced to a new main character, Book, played by David Ajala, who I last saw in Supergirl as Manchester Black, really works as our guide to this brave new world, even if Ajala's performance didn't really give us much to grip onto as it were. In a much smaller role, but perhaps one of the strongest performances of the series is Adhil Hussain as Aditya Sahil, seemingly the last person in the universe to hold onto Starfleet ideals. I'll be really interested to see where his storyline goes in the future.
As a finished episode, this was a pretty decent start to the new series, but it doesn't have the same level of excitement the previous season debuts had. In theory, this season should be very exciting. But just going off this opening episode, which is obviously designed to set things up, I'm not as excited for Discovery as I have been in the past. Hopefully, it'll turn itself around as the rest of the season goes on. Only time will tell.