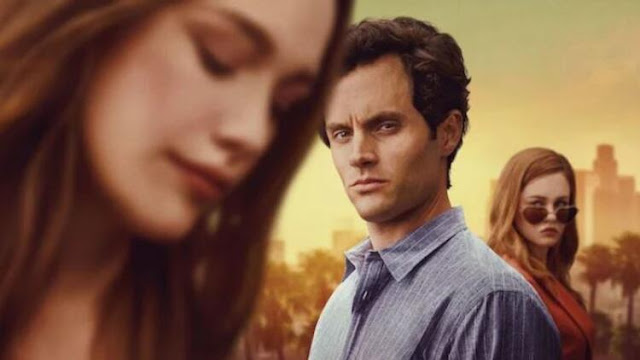 Following on from the very enjoyable first season, Season 2 of You sees Joe, now calling himself Will, in LA after his ex-girlfriend Candace showed up to cause trouble. I enjoyed the policital and social messages in Season 1 and so came to Season 2 wondering if showrunner, Sera Gamble, now joined by Greg Berlanit could keep it up. You'll be glad to know then that I found Season 2 to be just as enjoyable and bonkers as its first!

In many ways, Season 2 shouldn't work. But the shows subversive look at relationships and modern society continues to delight, this time also looking at the show's own audience, who lead actor, Penn Badgley had to take to social media to tell viewers that Joe isn't a romantic figure. And Joe is still just as unhinged here, and one of the highlights of the show, which I didn't mention in the Season 1 review is how pitch-perfect his voice overs are. They are an important part of the show, telling us what Joe is thinking about certain things when he isn't talking, some comments had me cringing at the creepiness of it, while some were laugh-out-loud.

One of the first questions you might have is why Joe chose LA after New York. Well, as Joe puts it, he hates LA so it would be the last place people, but mainly Candace, would go to look for him. Well, his own ego is the first thing that goes wrong with this plan and he quickly discovers that LA isn't the perfect hideaway he thought it was. It doesn't take long though for him to meet his new love interest, Love, who works at her wealthy parents story, Anavrin as the head chef.

Joe is dismayed however to learn that Love has an extremely co-dependent and troubled brother Forty, who struggles with alcohol and drugs and Loves extremely LA friends. And much to Joe's chagrin but the audiences hilarity, he does seem to fit in rather well with the LA lifestyle, even down to the green-juice drinks and Reiki cleanses. 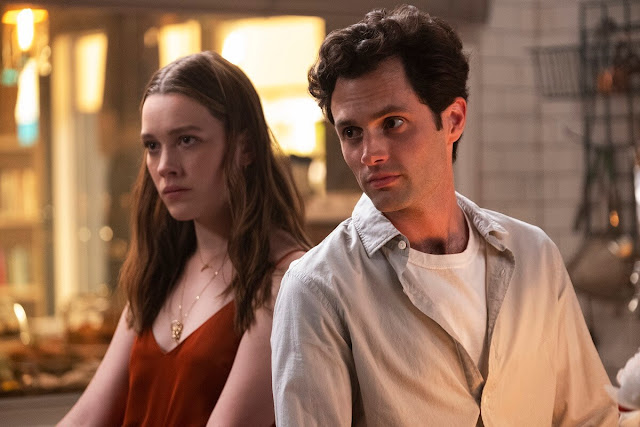 Gamble and Bertanti don't make us wait long before Joe's life starts to get complicated again with Candace arriving almost instantly and while you might think she's there to kill him, she's actually there to stop him from hurting anyone else. It's a nice take on a character who you might think just as nutty as her ex.  You quickly begins to push Joe in ways he hasn't been challenged before and though squeamishness does stop him going the whole way sometimes, there were moments when it reminded me of some of the antics Hannibal might have gotten up too, minus the cannibalistic nature! And once again, the show dives into his background making you feel conflicted things for a man who is a serial killer. It's an interesting and refreshing slant for a show like this to take, instantly making it stand out from other 'romantic' shows its akin to.

Joining Badgley is Victoria Pedretti, who hasn't long come away from her role in the chilling Haunting of Hill House, also on Netflix. And like any show, its continued future, lives and breathes on the strengths of its main cast. Luckily then You is in safe hands here. Badgley really impressed over the last couple of seasons, particularly with his voice overs of dialogue which should be incredibly cheesy but actually really work, but when paired against Pedretti, the show seems to be much more elevated. Not to say that his previous love-interest wasn't a great casting, but Pedretti's character might be slightly more unhinged than Joe, something we see as the show rattles towards its conclusion and its interesting to see Joe having to face the idea that he's bitten off more than he chew this time around.

Over the course of the first season, You certainly had a lot to say on the notions and ideas of masculinity, toxic relationships and how modern society has imbedded certain ideas and notions into the brains of everyone around. Season 2 takes those ideas and expands on them, what happens if the woman in a relationship is just as bad, if not worse and I'm looking forward to seeing where that is taken too in Season 3. I also appreciated that the whole cast seemed to understand that there was a certain amount of scenery-chewing needed to make these scripts work and expose the show's dark heart. And with plenty of twists and turns, You takes us to places we did expect and to places we didn't while giving us new information on what Joe into the person he is today. Once you finish this, you'll be begging for a third season, even though Season 3 is still a few years away just yet.