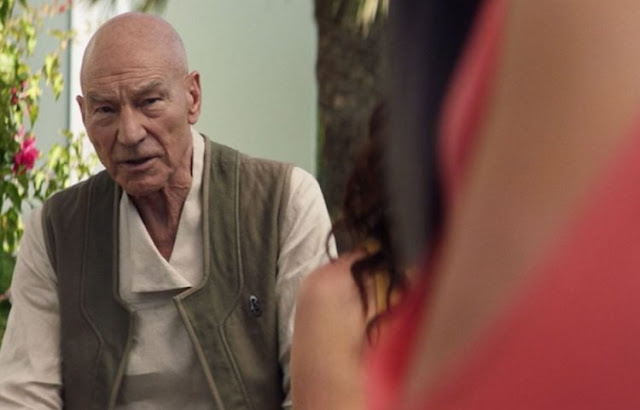 With Picard and his team coming out of the conduit they entered at the previous episode, this episode begins with them arriving in orbit of Soji's planet. But will they be able to save all the synths and stop the Romulan assault force on their way?

The title, Et in Arcadia Ego, is based on a French painting of the same name, and literally means that in every supposed paradise, death can still come. And that notion plays a big part in this episode too.

The journey through the conduit was a pretty rough one and everyone has different reactions to seeing the legendary planet that Soji comes from. Picard's eyes are full of wonder, Rios' interest, Soji is happy. Agnes is hiding under a desk but even she comes out for a quick look. But that sense of excitement and wonder doesn't last long as they all remember they are still be followed by the Romulans, and one in particular who wants to kill Soji more than any other. 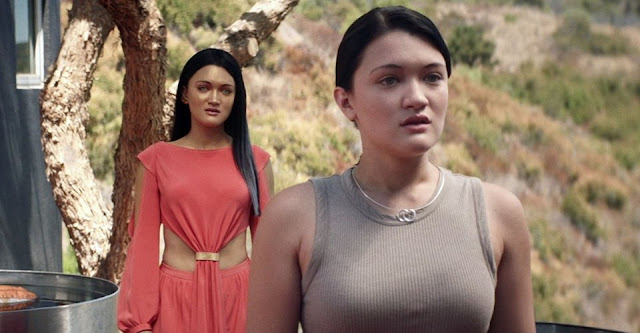 Then things get a little strange, the Borg Cube comes out of the transwarp conduit and saves Picard from the Romulan's, pretty looking space-orchids come to bring everyone down to the planet and then Picard has a seizure. It all happens so quickly its easy to forget this all happens before the titles even have to kick in. But even before they get to the planet, called Coppelius, its clear that this is going to have some lasting impact on our cast of characters and once they land, they have to get to the settlement that Soji only half-remembers. It was a sweet moment when Agnes confronted Picard about his condition, I've had my troubles with Agnes over the course of the series but this was a nice moment, but I've realised how complex her character is and how troubled. She also acts a good look at the other characters like Rios and Raffi who always seem composed.

The synth's-settlement is the Arcadia of the title, its beautiful and everyone wears flowing clothes. In a way, those costumes kind of pay tribute to the early years of The Next Generation and in a way, the planet is similar to those that they visited in the early years of TNG too. Of course, Soji is immediately welcomed, as are the rest of the crew and the androids pay a lot of attention to Picard's face. They only have ten more orchids to defend the planet and with a fleet of Romulan Warbirds. Brent Spiner puts in a guest appearance as Dr Altan Soong, whose related to Data's original creator and its nice to see Spiner involved.

It doesn't take long for things to take an even stranger turn when Soong takes most of the team aside, except for Picard, who sips tea while Soong absolves Soji of her guilt for bringing the Romulans to this hidden world. The Sutra turns up, the sister of the android who originally met Rios. Over the years, Sutra has studied the vision that has haunted Romulan culture but believes it was never meant for organic minds, instead it was meant for androids She also appears to have studied and learnt about the Vulcan mind-meld, and mind melds with Soji. She realises that this indeed a message for the synth's and realises its a call for all synthetic life to form an alliance. Also of interest is how the message says that the reason humans hate androids is because humans age and die, which is why Sutra was so fascinated with Picard's aging face. 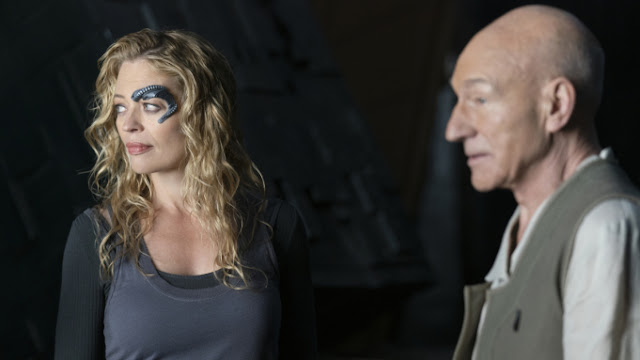 These new discoveries lead everyone to ask several questions. What do they do about this alliance? How do they know that it doesn't come from someone like, the Borg? I thought it was going to be the Borg, but they didn't make an appearance, I'm still hoping to see them at some point in the future. More strange though was why Picard made a call to Starfleet when its clear that they aren't in his corner in the slightest.

Throughout the episode, Agnes is the one who changes the most, the previous episode made it clear she didn't really see Soji as a person, but when she meets Soong, she realises the true nature of the debt she owes. She is then happy to devote her life to making more synthetic life because of the human life she took. The Synths are also dealing with their own issues, when they learn how to deal with Narek. This is almost a coming of age story for Soji who at just three-years-old, is learning the tough lessons about love. When she confronts Narek, and he professes his love for her yet again, her strength shines through.

Everything begins to go to pot though when Sutra takes things into her own hands, when she kills another synth and frees Narek, so that she can create the right sort of pressure to force everyone into an alliance with the other synthetic-life-forms. Sutra clearly believes in the worst of humanity and Soong has to begin a course of actions to save everyone, humans and synthetic. Picard gives a great speech about life and not every human will hate them, but Soong calls his bluff and the episode ends with Picard imprisoned. Death then arrives in the skies when the Romulans arrive...