In my review for the previous episode Nepenthe, I said that I don't like shows to take breathers when they are reaching their conclusions and the pace is really picking up. However, Nepenthe had a lot going for it, including the return of Will Riker and Deanna Troi. Broken Pieces, which is another breather-episode despite being only two episodes from the end, doesn't have much going for it and while it should have been picking up the pace, it seemed much happier keeping things confined to a few sets and not really advancing the plot. It was a bottle episode, but it didn't try to hide it.

What Broken Pieces did do though was show us the new status quo for Picard. All the characters are finally where they are meant to be with Soji finally aboard La Sirena, alongside most of the main cast and its the first time she's joined them for any reasonable length of time, though she hasn't met Elnor in any meaningful way, despite a scene a few episodes ago where he rescues Soji, Picard and Hugh. In fact, the title 'Broken Pieces' is actually really how the show feels at the moment, lots of different pieces that aren't fitting together just yet.

With Soji now on La Sirena, there is no real reason for the action to be taking place on the Borg-Cube. But it serve for a way to bring Seven of Nine back into the action, responding to a distress call from Elnor. Elnor, while I like the character, proves to be continually useless, despite saving Picard's life a few times. More interesting was that Seven willingly returned to the Borg, even becoming the Borg Queen for a few moments to try and save the rest of the Borg on the cube. Of course, this doesn't work and all the Borg are destroyed, but she does activate the Cube, which I'm hoping will be the catalyst to the Borg coming into season 2 properly. But I was a bit disappointed by the ending, all that climax of Seven becoming the Borg Queen, only for the Hive to return her to normal. 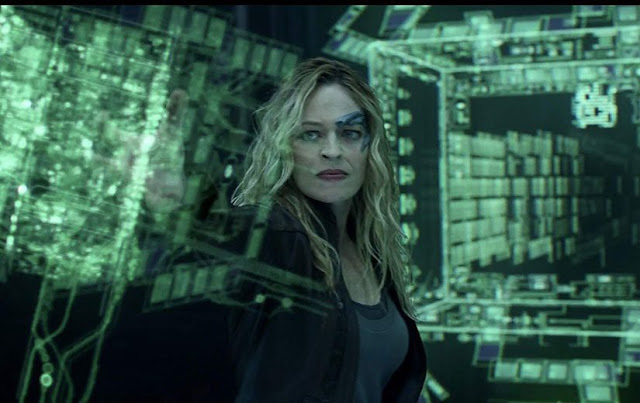 Broken Pieces also sees them beginning to humanize Nerissa, the evil Romulan who, up to this point, has been gleefully evil, with a little scenery-chewing and little bit of gross implication of incest, but she's been a great villain, but this attempt at giving her backstory should have been done throughout the series, not two episodes to the end, its a case of too little, too late.

Much of this episode thought takes place aboard La Sirena, with Soji's arrival, triggering Captain Rios as he recognises her. In fact, he's met the androids from the planet they are travelling to before and his old captain killed them and then himself. Raffi greats Soji with her usual friendliness, something she does until she is sure she can trust them but Rios' storyline is the most interesting this episode, even if it takes a while for the episode to elaborate on it. But Santiago Cabrera is entertaining enough to keep our attention until the final revelation.

While this episode might not be the peak-Picard, I think for this season that will be Nepenthe, Picard finally does feel like its heading somewhere. This is an episode that flows nicely and where for once the two storylines don't tread on each-other's toes. But maybe it was another breather-episode that we didn't need so close to the finale...