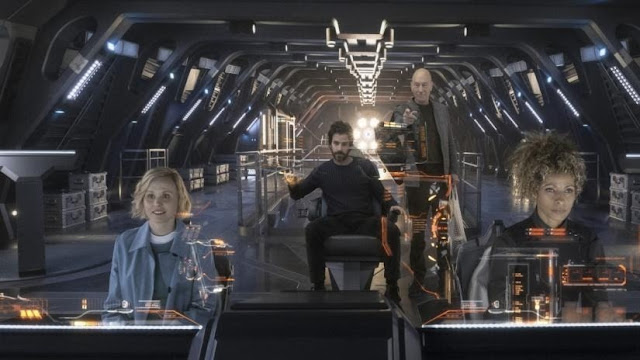 It's an established fact that the very best of science-fiction mirrors events in real life and there is no getting around the fact that the attack on Mars feels a lot like some of the terror attacks in modern memory. This was an attack that someone set up, was it Maddox or was it the Romulan Zhat Vash? There can be no doubt though that they did it to remove the heart from Starfleet.

The opening flashback sees a stunned and confused Picard offering Starfleet an ultimatum, either help the Romulans whose planet is about to be destroyed or his going to resign. It actually shows us a nice side to his character we never saw before. Picard obviously over-estimates his importance, there are many other Starfleet Captains who would do what they are told and there is a degree of arrogance on Picard's part where he feels he would never be replaced. But it also shows us that Picard will always do the right thing, even if no one else agrees with him. At the end of the last episode, we were introduced to Raffi, and the flashback also features her, someone who agrees with Picard whole-heartedly. While I've no doubt it will go into their backstory a lot more as the series goes on, I was a little confused as to who she was to him, was she his first officer after Riker? I guess we'll have to wait and find out.

Despite turning him away in the beginning, Raffi later tells Picard that she has seen evidence of Starfleet being a-party to the destruction of Mars. And Picard says that Romulan operatives couldn't act on Earth without Starfleets prior knowledge. The attack on Picard's vineyard, was excellent too as the Romulan death squad invade. But I don't care if it is Jean-Luc Picard, no way any one that age would get back up after being thrown onto a wooden table like that. This is Star Trek though so we should just go with it. Somehow though Picard and his staff are able to hold them off, hiding phasers under the tables and chairs. And as usual, the Zhat Vash spit out acid and kill themselves before anyone can question them. 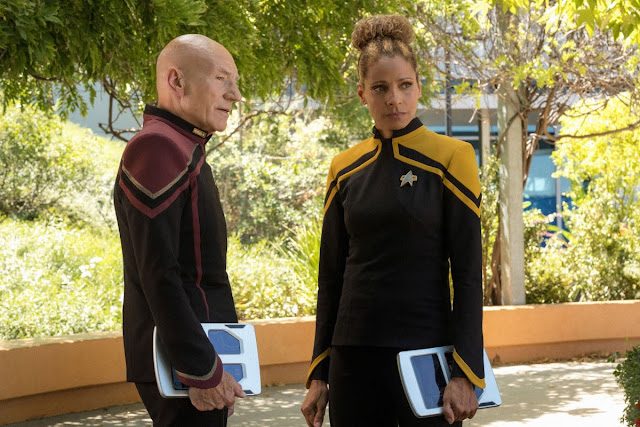 This all leads Picard to be even more steadfast in his quest and Raffi manages to wrangle him a small ship. The Enterprise it isn't but it'll do the job just as well. Captained by the dashing Captain Rios, presumably a former lover of Raffi's. I was a bit confused why all the holograms on his ship look like him but it was funny and then realised its probably because he trusts no one but himself.

If this episode does anything, it sees the crew beginning to be assembled. Picard, Rios, Raffi and Dr. Jurati. But given that Jurati had a meeting with the mysterious Vulcan - Oh, does that mean that she is currently a mole, I guess only time will tell again, but I doubt that Jurati will be an out-and-out baddie. I was annoyed though that Picard left his two Romulan friends as well as his dog, Number One to look after his house. The Romulans have already invaded his vineyard once, what's to say they won't do it again?

It was great to see Hugh back, the former Borg drone from The Next Generation. He was separated from the hive and went on to try and separate other drones and there was some great makeup on display, showing us that while the outer robotics might have been removed, much of his innards are still more machine than man. Hugh's input here lead to Soji meeting with other reclaimed Borg drones who were slowly regaining their humanity, but it does pose the question why is she the destroyer? Will she be the downfall of the remainder of the Romulan race? Or will there be time-travel involved somewhere along the line?

And then Rizzo, another evil Romulan appears to make sure that Narek is still on track with Soji. But there relationship seemed to imply some incest along the way? I think Picard is going to be headed into some seriously messed up waters before its debut season is done.