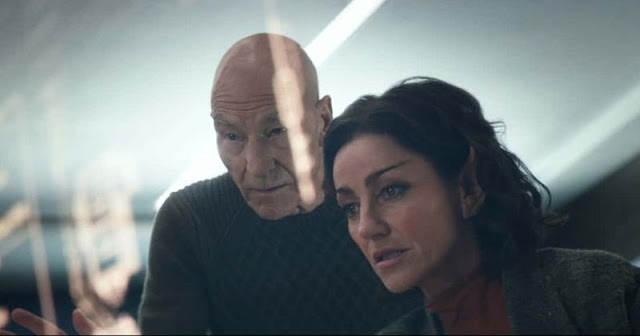 Episode two of Star Trek Picard doesn't really do anything apart from raise more questions, and while that isn't necessarily a bad thing, I wished it had answered at least a couple of them.

The action kicks off on the Utopia Planitia Shipyard and I was surprised that we got to see this so early on. I thought at least we'd see it half way through the season. But we follow F8 as he goes on a killing spree, having received mysterious orders and then destroys the Shipyard before destroying himself. But who sent those orders? Why did it happen on First Contact day, I'm assuming it has something to with the Borg? Why did all happen at the same time as a mass evacuation of Romulus? To add insult to injury we later see Doctor Jurati reading Isaac Asimov's The Complete Robot and this only raises questions concerning the laws of robotics, the most important of which is that Robots can't harm humans.

Another question this episode raises is how do the Romulan's have a disconnected Borg Cube. They explain that the reason the Borg haven't bothered with it is because they believe its a graveyard but how did the Romulans acquire it? Over the course of the last two episodes, they've made it clear that Romulans don't like artificial intelligence so it does seem strange that they would use Borg technology.

That brings us to the Zhat Vash, an even more secretive Romulan operation than the Tal Shiar. We still don't know why they sent a death-squad after Dahj, though if they hate artificial tech, that could be why. And why is Starfleet's Commodore Oh associating with Lieutenant Rizzo, a Romulan agent disguised as a human who is working with her younger brother, currently residing on the Borg Cube? And they've only just met so it does raise the question of why Soji is so quick to jump into bed with Rizzo's brother, Narek. It is a little surprising. 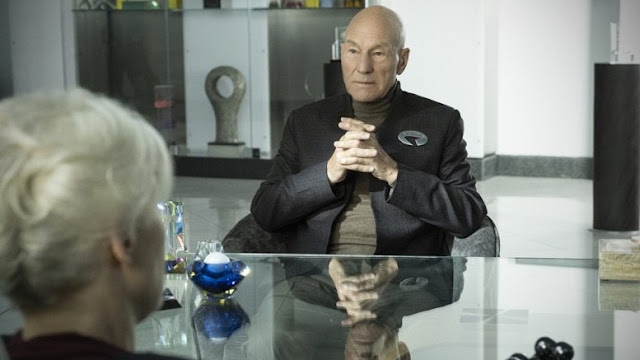 Something else I'm sure anyone else realised is that the Zhat Vash seem to be named after Picard's old girlfriend, Vash. Is that just a coincidence?

It was nice to see though that Soji doesn't really agree with the way the Romulans are treating the Borg they have got on-board the cube, even if they are trying to cure them. They are slowly being freed from their Borg implants like Picard and later Seven of Nine. It might be that Dahj had a secondary reason for finding Picard rather than just her 'father' Data, maybe she and Soji are also looking for someone to help free the 'Nameless Ones', former drones from the collective.

It was certainly a shock to learn that Picard has something wrong with his brain. I think I'm right in saying this was a subject addressed in The Next Generation, I think when we met future Picard in the finale of that series he had Irumodic Syndrome. Could this be the precursor to that, or something else? Maybe it might be linked to any lingering Borg technology in his brain? I was also shocked to see how Admiral Clancy treated Picard. No doubt that Picard is one of the best Captains and members of Starfleet, so there is no way she should have spoken to him like that. Picard is right when he says that Starfleet isn't what it used to be, but could Clancy have something to do with what is going on here? She refuses to give him a ship, but knowing all the friends Picard has, it won't take long before he assembles a crew for himself and wrangle himself a space-ship.

With this episode raising more questions than answers, it did feel like it didn't really do anything. But I am still really impressed with this new series, its big budget is clearly on display and being used to great effect and the supporting characters are just as interesting as the main ones. I really like Picard's house-keepers/friends, Loris and Zhaban, and I'll be interested to see what they get up to over the course of the series. And at the end we meet Raffi and there seems to be a whole exciting story there, given how the pair must have worked together after Nemesis. Also the intrigue around Starfleet is fascinating, how do Commodore Oh and Rizzo know each other and what side is Narek really on?